There is one Middle Eastern country that seems to get diplomatic cover from the United States whenever it does something wrong. It's a nation whose abuses of human rights and control of many holy sites inflamed Osama bin Laden's rage. It's a country whose actions incite "Islamist" extremism across the region. It's a country whose crimes go under-reported in American media, especially when those crimes implicate the US or other Western powers. 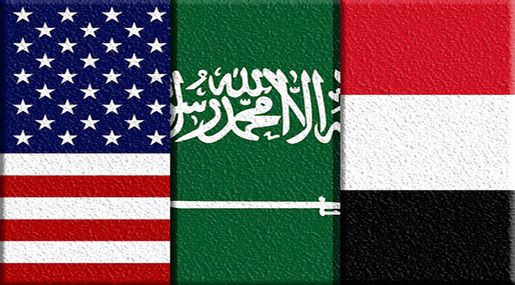 That nation is Saudi Arabia, of course.

While conspiracy theorists and the new wave of anti-Semites tag "Israel" as the Middle Eastern nation most responsible for America's woes, it has been our other long-term ally in the region that causes the United States its most serious problems, and leads us to actions in which we disgrace ourselves.

Consider Saudi Arabia's unjust war with Yemen, which has become a grotesque humanitarian disaster. American involvement in this war has hardly been acknowledged by our political class, and is barely even known to the public.

Understandably, perhaps, people want to look away from what is happening: With the help and connivance of the British and American governments, Saudi Arabia has been deliberately starving the country of Yemen, a nation unusually dependent on food imports.

The UN reported this week that nearly 14 million people, half of Yemen's population, are suffering a food "crisis" or "emergency." The next classification after emergency is "famine." The UN's efforts at relieving the hunger of Yemen reach just 3.5 million Yemeni people, and even this project is desperately underfunded. Beyond the starvation conditions, Saudi-led airstrikes have knocked over humanitarian relief resources in Yemen, and just this week killed another eight innocents in a single strike.

The US is complicit in this. America has been providing intelligence, running drone missions, and has some special forces on the ground in Yemen, all while Saudi Arabia continues its war against the Shi'ite Houthis who seized Yemen's capital during a civil war.

But the Saudi problem extends far beyond just Yemen. Arguably, Saudi Arabia is partly to blame for all the conflicts of the Middle East in which the US is participating, notably the fight against ISIS in Iraq, Syria, and Libya.

Saudi Arabia still funds, as official policy, radical and Wahhabist movements across the Islamic world, and beyond. The surge of extremist sympathies, even in formerly pro-American areas like Kosovo, trace their inspiration and their funding back to the Arabian peninsula. These Saudi-funded mosques produce many of the fighters that go to join the jihad of the Islamic State. While "ISIS" is a threat to the House of Saud in Saudia Arabia itself, it also provides a useful proxy in a long-term rivalry with Iranian proxies throughout the Middle East.

Most thinking people in America moan about Saudi Arabia. After 9/11, many conservatives called for America to end the reign of the "terror masters," and included Riyadh on their lists. Liberals also detest the regime, as an enemy of human rights and a promoter of the most revanchist movements in the Islamic world. President Obama frequently complains about Saudi Arabia.

And yet, his administration cooperates with them in a war that has no discernible relation to US interests. There's a kind of fatalism that settles over our friendship with Saudi Arabia. The US consoles itself: At least Saudi Arabia helps keep oil prices low, which keeps the pressure on Russia. And at least we know the royal family; just think of what would replace the House of Saud if it ever fell.

But even if we are stuck working with Saudi Arabia to keep worse "Islamists" from controlling the Islamic holy land, and even if we are stuck with them as a balancing power to the Iranian regime, the American people deserve some answer about why we are helping them starve Yemen. Why is this mission valuable to the US? Why are we participating, despite repeated warnings that it is a humanitarian disaster?

What kind of friendship requires something so transparently wicked?