Bahraini regime forces fired birdshots and tear gas to disperse dozens of demonstrators, who had taken to the streets in the tiny Gulf kingdom to express solidarity with prominent Shia Muslim cleric, Sheikh Issa Qassim, who was stripped of his citizenship by the Al Khalifah regime earlier this week. 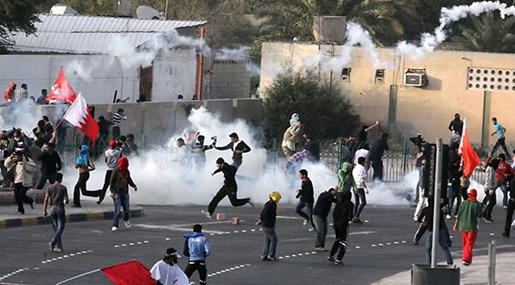 On Thursday evening, protesters gathered outside the home of the 79-year-old spiritual leader of Bahrain's main opposition bloc, the al-Wefaq National Islamic Society, in the northwestern village of Diraz, situated about 12 kilometers west of the capital Manama, to express their outrage at the measure against the top clergyman.

In further details, protesters, who were chanting slogans in support of Sheikh Qassim and in condemnation of the ruling dynasty, were attacked by regime forces as they intervened, firing shots and using tear gas to disperse the crowd.

Such development came a day after similar demonstrations were held in Bilad al-Qadim, a suburb of the capital.

Since February 14, 2011, thousands of anti-regime protesters have held numerous demonstrations on an almost daily basis in Bahrain, calling for the Al Khalifah family to relinquish power.

Scores of people have been martyred and hundreds of others injured or arrested in the Bahraini crackdown on the anti-regime activists.