The UN voiced concern over Bahrain's ongoing crackdown on expression and condemned the authorities for revoking its citizens' nationality. 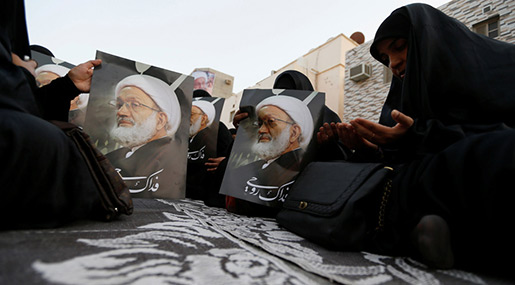 "It is unfortunate that instead of pressing forward with the recommendations made by the Bahrain Independent Commission of Inquiry, which was appointed by the King in 2011, the government has instead sought to undermine the enjoyment of civil and political rights in the country," Ravina Shamdasani, spokesperson for the Office of the UN High Commissioner for Human Rights [OHCHR], said.

Shamdasani further urged the government to protect civil society activists from intimidation or reprisals for their work.

"We call on the government to take immediate confidence-building measures, including the release of all those who have been detained for the exercise of their human rights," she added.

According to her, there appears to be a "media campaign against human rights defenders" in Bahrain, adding that the authorities imposed travel bans on other rights defenders.

It was on Monday that the Bahraini regime revoked the citizenship of top Shiite cleric Sheikh Issa Qassim, who is now facing deportation. Sheikh Qassim was instrumental in backing the mass protest movement in the country. The government, however, claimed that he used his position to "serve foreign interests" and promote "sectarianism and violence."

"He is the latest of at least 250 people who have had their nationalities revoked since July 2014," she said.