"Israeli" apartheid forces have shot and martyred a Palestinian for allegedly hurling stones at vehicles and demolished the house of another Palestinian in the West Bank. 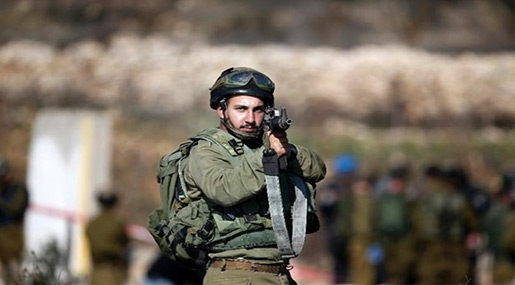 The "Israeli" forces shot and martyred Mahmoud Badran, 20, alleging that he had thrown stones at moving vehicles between the villages of Beit Sira and Beit Ur in the occupied West Bank.

Two other Palestinians were also wounded. They were fired at over the same allegation.

The "Israeli" military said in a statement that two "suspects" were also arrested. It is not clear if those arrested were the same two people who were wounded.

"Israeli" media alleged that the Palestinians had inflicted damage on the passing vehicles and slightly injured two drivers.

The Tel Aviv regime routinely demolished the houses of Palestinians it accuses of operations against "Israelis". The demolitions displace families, including women and children, who have had nothing to do with the alleged attacks.

The occupied territories had witnessed heightened tensions since August 2015, when the "Israeli" entity imposed restrictions on the entry of Palestinian worshipers into the al-Aqsa Mosque compound in East al-Quds [Jerusalem].

At least 213 Palestinians have lost their lives at the hands of "Israeli" forces since the beginning of last October amid the tensions.

The provocative demolitions by the "Israeli" apartheid regime, as well as its refusal to stop illegal settlement construction on occupied Palestinian territories, have dimmed hopes for any attempts aimed at bringing peace to Palestinians.

Over half a million "Israeli" settlers live in more than 230 illegal settlements built since the 1967 "Israeli" occupation of the West Bank, including East al-Quds. The settlements are considered by the international community as illegal.

An international French-backed conference is planned to convene later in the year to discuss so-called peace between "Israelis" and Palestinians. A meeting of the European Union [EU] foreign ministers in Luxembourg on Monday voiced support for the project, although the "Israeli" regime reiterated its opposition.