Four people were injured and 26 Palestinians were left homeless on Sunday afternoon after "Israeli" apartheid forces assaulted locals and demolished Palestinian structures in the village of Susiya in the southern occupied West Bank, in what activists said was an unprecedented move to carry out a demolition during the holy month of Ramadan. 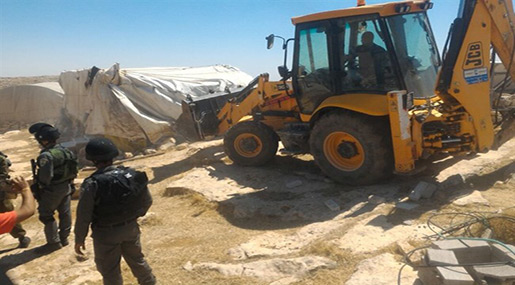 According to an "Israeli" group, two homes were demolished in the southern part of Susiya, in addition to agricultural structures, including a barn and an outdoor kitchen.

Jihad Nawajaah, head of the local council of Susiya said that an "Israeli" bulldozer under military protection tore down a two-room brick house that belonged to Khalil Salameh Nawajaah.

He highlighted that seven members of Nawajaah family were left homeless and would likely spend the night in the open.

The "Israeli" group said that after Palestinians and international solidarity activists remained inside one of the houses to resist the demolition, "Israeli" apartheid forces violently beat them, injuring four people, and that "Israeli" soldiers pushed elderly locals as well as women.

After carrying demolitions in Susiya, the convoy of bulldozers and "Israeli" military vehicles subsequently continued toward the nearby village of Diraat, seemingly to carry out further demolitions.

However, the "Israeli" entity's so-called Coordinator of Government Activities in the Territories [COGAT] alleged that "Enforcement measures were taken against four illegal buildings that were built without permits and approval from authorized officials."

The residents of Susiya, added Nawajaah, have been facing a "systematic" process of displacement and home demolition, while farmers and shepherds have also been prevented from tending to their agricultural lands.

Some 300 people live in Susiya, located in the hills near al-Khalil [Hebron], adjacent to an illegal "Israeli" settlement of the same name. The Palestinian residents of the village live mainly on farmland, and their community had had no running water or electricity since they were expelled 30 years ago from the village's original location.

Since the "Israel" entity's so-called Civil Administration declared the village land an "archaeological site" in 1986, its Palestinian residents had been expelled from their homes several times, relocating to caves, tents, and temporary wooden shelters in the area, according to B'Tselem.

While "Israeli" apartheid authorities had routinely declared that Susiya's residents lack the appropriate permits to reside there, villagers said authorities had systematically denied their right to build for years.

The most recent legal decision regarding Susiya was made by the so-called "Israeli" Supreme Court in May 2015, which refused to freeze the demolition orders threatening the village, meaning that Susiya's residents face "imminent demolition of their homes, structures for public use, and agricultural facilities," according to B'Tselem.

The decision sparked international outrage, with the US State Department warning that demolitions in the village would be "harmful and provocative." Several US lawmakers had since voiced their support for the village.

According to the UN Office for the Coordination of Humanitarian Affairs [OCHA], some 900 Palestinians had been left homeless by "Israeli" home demolitions since the start of the year.

The majority were demolished in Area C, the more than 60 percent of the occupied West Bank under full "Israeli" control, which includes Susiya.