Once again it's the close "Israeli"-Saudi harmony that floats into the regional arena. 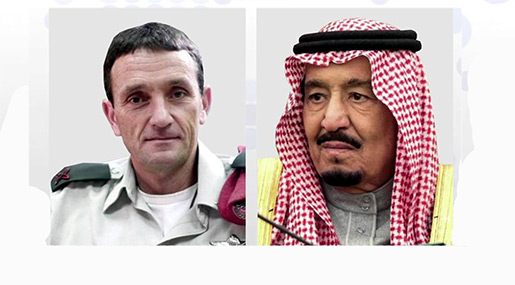 The tribute by the apartheid entity's military intelligence chief Maj. Gen. Herzi Halevy at an international security forum followed years of veiled references by "Israel" to back-channel contacts with Gulf Arab powers - despite their lack of formal bilateral ties.

"This is not the same Saudi Arabia that we saw a year and a half ago. There is a different king, with a support network around him," Halevy told the Herzliya Conference, referring to Salman's accession.

Halevy further added: "Saudi Arabia is much more proactive, aspiring to lead the Sunni camp in the Middle East. It is the country that has perhaps taken the strongest stand in the face of Iran in the Middle East, and it is carrying out very deep structural reforms whose bottom line is to bring about a Saudi Arabia in 2030 with a different economy that is not dependent on oil, etcetera."

"Israel" has long talked about a "new horizon" in the Middle East, in which it has shared common ground with some Arab states such as Egypt and Saudi Arabia in their wariness towards Iran.

In a separate address to the Herzliya Conference, Dore Gold, director-general of "Israel's" Foreign Ministry, said a dialogue was underway with Arab countries. However, he was unable to divulge which ones, given the interlocutors' worries about domestic public opinion.

"Under the ice, a lot of hot water is flowing," Gold said.