A fresh wave of Daesh terrorists [the Arabic acronym for the terrorist "ISIS" group] left Syria and could commit attacks imminently in France and Belgium, Belgian police have been warned, according to media reports on Wednesday. 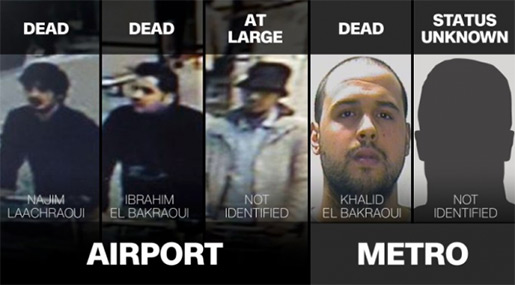 "Fighters traveling without passports left Syria about a week and a half ago in order to reach Europe by boat via Turkey and Greece," a memo sent to police and security services across Belgium said, according to La Derniere Heure newspaper.

Relatively, the terrorists were traveling armed and planning to carry out attacks in groups of two, the memo added.

"Their action is imminent," the memo stressed, without giving the total of suspected attackers.

For its part, Belgium's OCAM national crisis center in a statement did not deny the report, but said the information needed to be looked at further.

The information reported by the media "is non-contextualized and, as such, has not made a direct impact on the current level of threat" in Belgium.

Meanwhile, Belgium's terror alert is at the second-highest level of three, which means a threat is possible and likely.

In parallel, Belgium is still reeling from the Daesh suicide bombings at Brussels airport and on the city's metro on March 22 which killed 32 people and wounded hundreds more.