The ascension of far-right, ultra-nationalist politician Avigdor Lieberman to the "Israeli" cabinet does not change the discussion when it comes to crucial issues in the Zionist entity's politics. 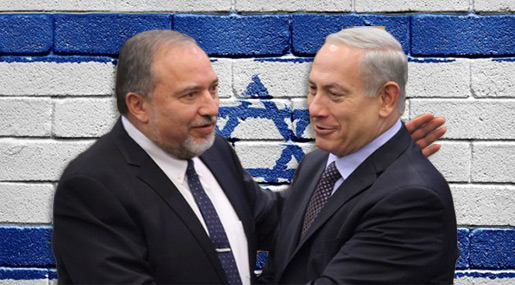 It is still business as usual in Tel Aviv. After all, it is Lieberman's once-again-new boss, former-ally-turned-archrival Benjamin Netanyahu who is the 'king of the status quo'.

Following Netanyahu's appointment of Lieberman - who heads the far-right Yisrael Beitenu party - as "Israel's" new War Minister, the question most commonly asked is whether Tel Aviv is gearing up for another war.

The answer is quite simple, really: Tel Aviv is always gearing up for war.

Unprovoked aggression and brutal military occupation are the only constant in "Israeli" political life. The very essence of the "Israeli" entity is founded upon an extremist ideology and war itself.

In fact, one of the greater ironies of the "Israeli"-Arab decades-long conflict is the name of the army, which has attacked and invaded every single one of its neighbors at one time or another, calling itself the "‘Israeli' Defense Forces".

As such, Lieberman - having already served as the foreign minister in two previous Netanyahu governments and known for little more than belligerent threats, including the advocacy of beheading Arab citizens for showing disloyalty, invading the Gaza Strip and bombing Egypt's Aswan Dam - is by no means an unpredictable addition to the "Israeli" cabinet.

When I asked Hamas's Beirut-based, top representative in Lebanon Osama Hamdan about the impact Lieberman's appointment will have on any so-called peace process between the "Israelis" and Palestinians, he replied dismissively, "they don't need to have a Lieberman."

"Throughout the negotiation period, between 1992 until now, including the Oslo Agreements, there was no will in "Israel" to have peace based on giving the Palestinians their rights and their own state. The admission of Lieberman into the government is simply a continuation of this way of doing business [in ‘Israel']," Hamdan added.

In the latest demonstration of just how committed he is to maintaining the status quo, the "Israeli" premier ruled out any possibility of returning the occupied Golan Heights to Syria. Opting to hold a cabinet meeting in the occupied territory, Netanyahu said, "The Golan Heights will remain in the hands of 'Israel' forever."

Netanyahu, much like the previous administrations in Tel Aviv, has made it perfectly clear - far ahead of Lieberman's appointment - that the illegal settlement expansion will continue unabated.

Meanwhile, attacks against Palestinians and the al-Aqsa Mosque in the occupied West Bank continues to be a feature of daily life, as repeated "Israeli" military incursions into the Gaza Strip grow bloodier with each new campaign.

"There is no chance for peace in the future between the Palestinians and the ‘Israelis'," Hamdan opines.

However, Lieberman's appointment is not about war and peace as much as it is about political survival and Netanyahu's insatiable thirst for power.

Following a dangerous slide in the polls earlier this year, the "Israeli" premier, who won a fourth term in office last year with a wafer-thin majority of just one seat in the 120-member Knesset, found himself increasingly vulnerable to falling out with his political allies.

That is not a place Netanyahu can afford to be in, as "Israel" experiences an economic slowdown, a spike in the cost of living and previously unseen schisms among "Israel's" governing and security institutions.

The appointment of Lieberman, whose party has six Knesset seats, has procured the most right-wing government in "Israeli" history for Netanyahu.

In fact, the strength of right-wing sentiment among the "Israeli" public has never been stronger, transforming its society from a conservative to radically populist one.

According to political science professor at the Birzeit University in Ramallah, Dr. Nemr Saad, "‘Israeli' public opinion is tilting towards the right and that is because the voices of the right have become the dominant force in "Israel", following a very effective campaign by the right-wing parties. They use Palestinian acts of resistance, which they call terrorism, to promote their agenda."

Netanyahu, who is looking to beat out David Ben Gurion as the longest serving prime minister, is using this trend to prop up his government effectively and transforming the "Israeli" political arena in the process.

These changes are certain to make the already unbearable living conditions for Palestinians that much harder, as the debate over what constitutes a ‘legal' killing of a Palestinian becomes a lot more forgiving to occupation forces, who have long since practiced the policy of shooting first and asking questions later.

Little else will change, as long as "Israeli" governments both ‘moderate' and radical alike continue to define occupation and acts of aggression as necessary tools for guaranteeing ‘security'.

Aside from the Palestinians, Persian Gulf Arab monarchies may also be losing out with the appointment of Avigdor Lieberman.

Prior to Lieberman's appointment, it appeared that the stage had been set for Isaac Herzog's center-left Zionist Union party, which has 24 lawmakers, to agree on a unity government alliance with Netanyahu's right-wing Likud.

The news had reportedly spurred on a behind-the-scenes move for a regional conference - including "Israel" and prospectively hosted by Egypt.

While Tel Aviv's shift rightward seems to place that initiative in even greater jeopardy, it is not exactly unthinkable for the Saudis - who have been broadening their areas of interest with the "Israelis" in recent months - to make peace with the man who has called for the beheading of Arabs.