How a legendary bond trader from Salomon Brothers brokered a do-or-die deal that reshaped US-Saudi relations for generations. 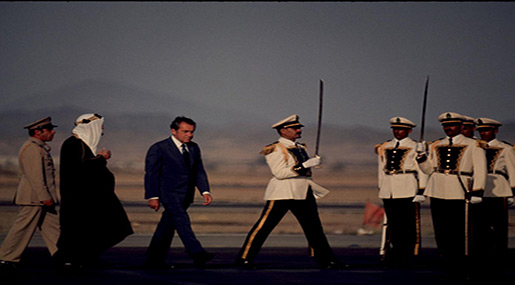 Failure was not an option.

It was July 1974. A steady predawn drizzle had given way to overcast skies when William Simon, newly appointed US Treasury secretary, and his deputy, Gerry Parsky, stepped onto an 8 am flight from Andrews Air Force Base.

On board, the mood was tense. That year, the oil crisis had hit home. An embargo by OPEC's Arab nations-payback for US military aid to the "Israelis" during the Yom Kippur War-quadrupled oil prices. Inflation soared, the stock market crashed, and the US economy was in a tailspin.

Officially, Simon's two-week trip was billed as a tour of economic diplomacy across Europe and the Middle East, full of the customary meet-and-greets and evening banquets. But the real mission, kept in strict confidence within President Richard Nixon's inner circle, would take place during a four-day layover in the coastal city of Jeddah, Saudi Arabia.

The goal: neutralize crude oil as an economic weapon and find a way to persuade a hostile kingdom to finance America's widening deficit with its newfound petrodollar wealth. And according to Parsky, Nixon made clear there was simply no coming back empty-handed. Failure would not only jeopardize America's financial health but could also give the Soviet Union an opening to make further inroads into the Arab world.

It "wasn't a question of whether it could be done or it couldn't be done," said Parsky, 73, one of the few officials with Simon during the Saudi talks.

At first blush, Simon, who had just done a stint as Nixon's energy czar, seemed ill-suited for such delicate diplomacy. Before being tapped by Nixon, the chain-smoking New Jersey native ran the vaunted Treasuries desk at Salomon Brothers.

To career bureaucrats, the brash Wall Street bond trader-who once compared himself to Genghis Khan-had a temper and an outsize ego that was painfully out of step in Washington. Just a week before setting foot in Saudi Arabia, Simon publicly lambasted the Shah of Iran, a close regional ally at the time, calling him a "nut."

But Simon, better than anyone else, understood the appeal of US government debt and how to sell the Saudis on the idea that America was the safest place to park their petrodollars. With that knowledge, the administration hatched an unprecedented do-or-die plan that would come to influence just about every aspect of US-Saudi relations over the next four decades [Simon died in 2000 at the age of 72].

The basic framework was strikingly simple. The US would buy oil from Saudi Arabia and provide the kingdom military aid and equipment. In return, the Saudis would plow billions of their petrodollar revenue back into Treasuries and finance America's spending.

It took several discreet follow-up meetings to iron out all the details, Parsky said. But at the end of months of negotiations, there remained one small, yet crucial, catch: King Faisal bin Abdulaziz Al Saud demanded the country's Treasury purchases stay "strictly secret," according to a diplomatic cable obtained by Bloomberg from the National Archives database.

With a handful of Treasury and Federal Reserve officials, the secret was kept for more than four decades-until now.

In response to a Freedom-of-Information-Act request submitted by Bloomberg News, the Treasury broke out Saudi Arabia's holdings for the first time this month after "concluding that it was consistent with transparency and the law to disclose the data," according to spokeswoman Whitney Smith. The $117 billion trove makes the kingdom one of America's largest foreign creditors.

Yet in many ways, the information has raised more questions than it has answered. A former Treasury official, who specialized in central bank reserves and asked not to be identified, says the official figure vastly understates Saudi Arabia's investments in US government debt, which may be double or more.

The current tally represents just 20 per cent of its $587 billion of foreign reserves, well below the two-thirds that central banks typically keep in dollar assets. Some analysts speculate the kingdom may be masking its US debt holdings by accumulating Treasuries through offshore financial centers, which show up in the data of other countries.

Exactly how much of America's debt Saudi Arabia actually owns is something that matters more now than ever before.

While oil's collapse has deepened concern that Saudi Arabia will need to liquidate its Treasuries to raise cash, a more troubling worry has also emerged: the specter of the kingdom using its outsize position in the world's most important debt market as a political weapon, much as it did with oil in the 1970s.

In April, Saudi Arabia warned it would start selling as much as $750 billion in Treasuries and other assets if Congress passes a bill allowing the kingdom to be held liable in US courts for the Sept. 11 terrorist attacks, according to the New York Times.

The threat comes amid a renewed push by presidential candidates and legislators from both the Democratic and Republican parties to declassify a 28-page section of a 2004 US government report that is believed to detail possible Saudi connections to the attacks. The bill, which passed the Senate on May 17, is now in the House of Representatives.

Saudi Arabia's Finance Ministry declined to comment on the potential selling of Treasuries in response. The Saudi Arabian Monetary Agency didn't immediately answer requests for details on the total size of its US government debt holdings.

"Let's not assume they're bluffing" about threatening to retaliate, said Marc Chandler, the global head of currency strategy at Brown Brothers Harriman. "The Saudis are under a lot of pressure. I'd say that we don't do ourselves justice if we underestimate our liabilities" to big holders.

In the past year alone, the monetary authority has burned through $111 billion of reserves to plug its biggest budget deficit in a quarter-century, pay for costly wars to defeat "ISIS", and wage proxy campaigns against Iran. Though oil has stabilized at about $50 a barrel (from less than $30 earlier this year), it's still far below the heady years of $100-a-barrel crude.

Saudi Arabia's situation has become so acute the kingdom is now selling a piece of its crown jewel-state oil company Saudi Aramco.

What's more, the commitment to the decades-old policy of "interdependence" between the US and Saudi Arabia, which arose from Simon's debt deal and ultimately bound together two nations that share few common values, is showing signs of fraying. America has taken tentative steps toward a rapprochement with Iran, highlighted by President Barack Obama's landmark nuclear deal last year. The US shale boom has also made America far less reliant on Saudi oil.

"Buying bonds and all that was a strategy to recycle petrodollars back into the US," said David Ottaway, a Middle East fellow at the Woodrow Wilson International Center in Washington. But politically, "it's always been an ambiguous, constrained relationship."

Yet back in 1974, forging that relationship (and the secrecy that it required) was a no-brainer, according to Parsky, who is now chairman of Aurora Capital Group, a private equity firm in Los Angeles. Many of America's allies, including the UK and Japan, were also deeply dependent on Saudi oil and quietly vying to get the kingdom to reinvest money back into their own economies.

"Everyone-in the US, France, Britain, Japan-was trying to get their fingers in the Saudis' pockets," said Gordon S. Brown, an economic officer with the State Department at the US embassy in Riyadh from 1976 to 1978.

For the Saudis, politics played a big role in their insistence that all Treasury investments remain anonymous.

Tensions still flared 10 months after the Yom Kippur War, and throughout the Arab world, there was plenty of animosity toward the US for its support of "Israel".

According to diplomatic cables, King Faisal's biggest fear was the perception Saudi oil money would, "directly or indirectly," end up in the hands of its biggest enemy in the form of additional US assistance.

Treasury officials solved the dilemma by letting the Saudis in through the back door. In the first of many special arrangements, the US allowed Saudi Arabia to bypass the normal competitive bidding process for buying Treasuries by creating "add-ons." Those sales, which were excluded from the official auction totals, hid all traces of Saudi Arabia's presence in the US government debt market.

"When I arrived at the embassy, I was told by people there that this is Treasury's business," Brown said. "It was all handled very privately."

By 1977, Saudi Arabia had accumulated about 20 per cent of all Treasuries held abroad, according to The Hidden Hand of American Hegemony: Petrodollar Recycling and International Markets by Columbia University's David Spiro.

Another exception was carved out for Saudi Arabia when the Treasury started releasing monthly country-by-country breakdowns of US debt ownership. Instead of disclosing Saudi Arabia's holdings, the Treasury grouped them with 14 other nations, such as Kuwait, the United Arab Emirates and Nigeria, under the generic heading "oil exporters"-a practice that continued for 41 years.

The system came with its share of headaches. After the Treasury's add-on facility was opened to other central banks, erratic and unpublicized foreign demand threatened to push the US over its debt limit on several occasions.

An internal memo, dated October 1976, detailed how the US inadvertently raised far more than the $800 million it intended to borrow at auction. At the time, two unidentified central banks used add-ons to buy an additional $400 million of Treasuries each. In the end, one bank was awarded its portion a day late to keep the US from exceeding the limit.

Most of these maneuvers and hiccups were swept under the rug, and top Treasury officials went to great lengths to preserve the status quo and protect their Middle East allies as scrutiny of America's biggest creditors increased.

Over the years, the Treasury repeatedly turned to the International Investment and Trade in Services Survey Act of 1976-which shields individuals in countries where Treasuries are narrowly held-as its first line of defense.

The strategy continued even after the Government Accountability Office, in a 1979 investigation, found "no statistical or legal basis" for the blackout. The GAO didn't have power to force the Treasury to turn over the data, but it concluded the US "made special commitments of financial confidentiality to Saudi Arabia" and possibly other OPEC nations.

Simon, who had by then returned to Wall Street, acknowledged in congressional testimony that "regional reporting was the only way in which Saudi Arabia would agree" to invest using the add-on system.

"It was clear the Treasury people weren't going to cooperate at all," said Stephen McSpadden, a former counsel to the congressional subcommittee that pressed for the GAO inquiries. "I'd been at the subcommittee for 17 years, and I'd never seen anything like that."

Today, Parsky says the secret arrangement with the Saudis should have been dismantled years ago and was surprised the Treasury kept it in place for so long. But even so, he has no regrets.

Doing the deal "was a positive for America."