A photo of a dead migrant baby pulled from the Mediterranean was published by a charity hoping to force European leaders to grant migrants safe passage, after hundreds were presumed to have died at sea last week. 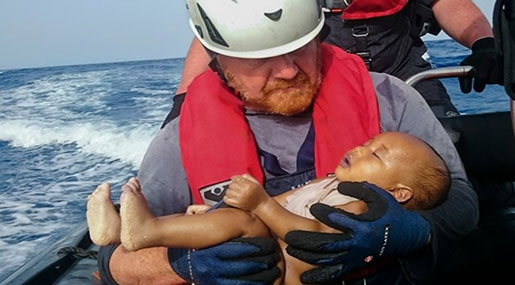 The baby in the photograph was not identified, but the German non-governmental organization Sea-Watch said the infant was found in the water last week after a wooden boat carrying 350 migrants capsized off the Libyan coast.

The photo shows the baby, its eyes closed with blue-tinged lips, in the arms of a rescuer. Many of the migrants had already drowned when the rescue boat arrived, the humanitarian group said, without giving a specific number.

"If we do not want to see such pictures we have to stop producing them," Sea-Watch said in a statement released with the photo Monday.

"In the wake of these disastrous events it becomes obvious that the calls by EU politicians to avoid further death at sea, sum up to nothing more than lip service."

The image was released after a deadly week in the Mediterranean, with 700 feared dead and several small children reportedly drowned in a series of boat accidents as thousands continue to attempt the deadly sea crossing to Europe in rickety vessels from the Middle East and Africa. 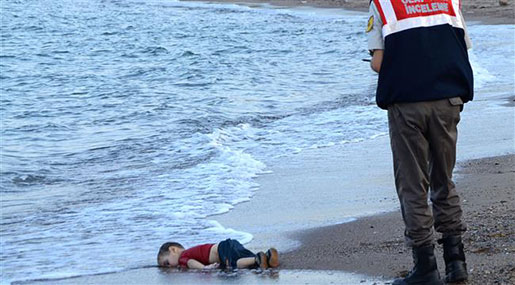 Many of those who have died at sea trying to reach European shores were children. The image of a drowned three-year-old Syrian boy Aylan Kurdi washed ashore on a Turkish beach last year stunned the world.

"These accidents will not stop... a policy forcing people on the boats will always lead to such pictures. We think that solely the establishment of new systems ensuring legal and safe entries to EU can finally lead to an ending of this humanitarian tragedy," added the statement.

Sea-Watch justified the publication of the photograph saying that such images "have to be acknowledged by the European society as the tragedies are the consequence of EU foreign policy".

Over one million migrants, many refugees escaping conflict in Syria and other states, arrived in Europe in 2015, with almost 200,000 arriving so far this year by land and sea routes.

The influx has caused concern in some conservative EU societies, boosting right-wing parties and prompting the bloc to negotiate a controversial deal with key transit country Turkey to stem the flow of migrants.