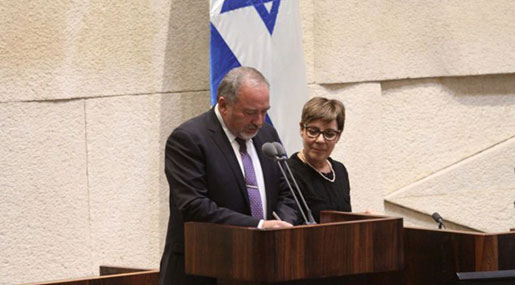 The former foreign minister was sworn in after receiving 55 votes in the 120-seat parliament [Knesset] while 43 members voted against him on Monday.

Described by the "Israeli" daily Haaretz as a politician "to whom military DNA is utterly foreign," Lieberman is known for his controversial comments, his harsh policies against Palestinians, and pro-settlement stance.

In his letter of resignation, Avi Gabbay said that recent "political maneuvering" and replacements are "grave actions that ignore what is important for [‘Israel's'] security and will bring about more extremism and rifts among the people."

Bibi signed up Lieberman as the entity's new minister of military affairs on Wednesday, shortly after the former war minister Moshe Ya'alon resigned citing "lack of trust" in Netanyahu.

"I told the prime minister this morning that due to his conduct in recent developments, and in light of my lack of trust in him, I am resigning," said Ya'alon on May 20.

"The development does not surprise the Foreign Ministry. Whoever follows daily the procedures and violations carried out by the extremist Netanyahu administration against the Palestinian people, [sees] the racist, radical and violent nature of the politics of the cabinet since day one," read a statement released on May 19.