On a secret trip to Syria, the new commander of US forces in the Middle East said he felt a moral obligation to enter a war zone to check on his troops and make his own assessment of progress in organizing local Arab and Kurd fighters for what has been a slow campaign to push Daesh [Arabic acronym for "ISIS" / "ISIL"] out of Syria. 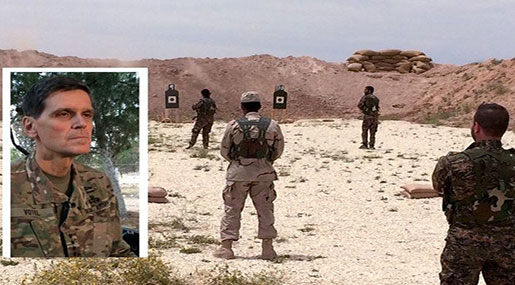 Votel, who has headed US Central Command for just seven weeks, became the highest-ranking US military officer known to have entered Syria since the US began its campaign to counter Daesh in 2014.

The circumstances were exceptional because the US has no combat units in Syria, no diplomatic ties with Damascus and for much of the past two years has enveloped much of its Syria military mission in secrecy.

Votel flew into northern Syria from Iraq, where Friday he had conferred with US and Iraqi military commanders. In Syria he met with US military advisers working with Syrian Arab fighters and consulted with leaders of the Syrian Democratic Forces, an umbrella group of Kurdish and Arab fighters supported by the US.

A small group of reporters accompanied Votel under ground rules that, for security reasons, prohibited disclosing his visit until after he had left Syria.

Aides said Votel's flight into Syria was the first made in daylight by US forces, who have about 200 advisers on the ground. Military ground rules for the trip prohibited reporting the kind of aircraft Votel used, the exact location where he landed and the names or images of the US military advisers who said they have been operating from the camp since January.

An Associated Press reporter and journalists from two other news organizations were the first Western media to visit the secretive operation.

The last known high-level US official to visit Syria was Brett McGurk, Obama's envoy to the coalition fighting Daesh militants. He spent two days in Syria in late January, including a tour of Ain al Arab, Kobani in Kurdish, the small town near the Turkish border where Kurdish fighters backed by US airstrikes had expelled an entrenched group of Daesh militants a year earlier.

In the interview, Votel said his visit had hardened his belief that the US is taking the right approach to developing local forces to fight Daesh.

"I left with increased confidence in their capabilities and our ability to support them," he said. "I think that model is working and working well."