The top American general for the Middle East said Friday he is confident that Iraq is on course to defeating Daesh [the Arabic Acronym for the terrorist "ISIS"/ "ISIL" group]. 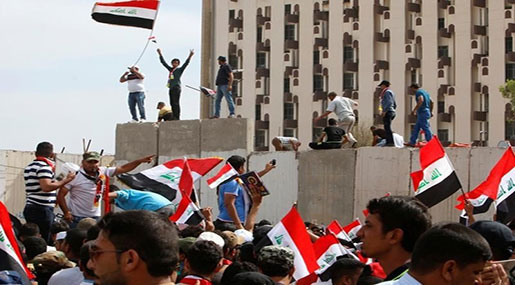 Gen. Joseph Votel, the new head of US Central Command, spent the day consulting with US and Iraqi military officials and visiting a base north of Baghdad that is training Iraqi army combat units.

"They are getting better," he told reporters later.

Noting the Iraqis' recent battlefield successes, including the recapture of Ramadi late last year and their retaking this week of Rutba, a strategic crossroads in western Iraq, Votel said he sees momentum developing and Iraqi confidence rising.

"I think their readiness is improving," he said, adding, "I think they're getting a better handle on the challenges that they face."

Votel said the Iraqis need to do what it takes to continue the momentum they have gained lately.

This comes as angry protesters managed to enter Prime Minister Haider al-Abadi's office Friday after breaking into the Green Zone for the second time in three weeks.

They initially faced tough resistance from forces guarding the premier's office but some were able to muscle past and briefly enter the premises.

The protesters gathered on Tahrir Square in central Baghdad but they removed barbed wire on one of the main bridges over the Tigris and converged the Green Zone.