In a joint appearance of "Israeli" and Saudi Arabian officials, the kingdom's Prince Turki al-Faisal and "Israeli" regime's Maj. Gen. Yaakov Amidror shared a stage Thursday night in Washington, debating ways to advance a two-state solution between "Israelis" and Palestinians, while also expressing common concerns over the Iranian nuclear deal and growing instability in the region. 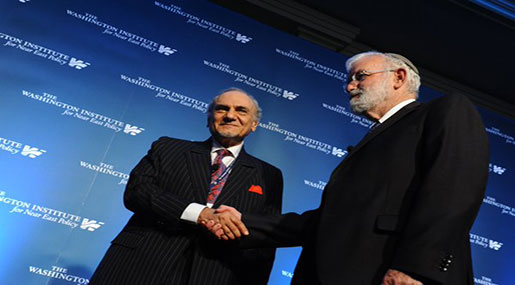 Al-Faisal, the former Saudi intelligence chief and ambassador to Washington, insisted that the so-called Arab Peace Initiative, a Saudi proposal to end the "Israeli"-Palestinian conflict that was endorsed by the Arab League in 2002, was the path toward reaching a final-status agreement.

Amidror, a former "Israeli" security adviser to "Israeli" Prime Minister Benjamin Netanyahu, urged the Arab world to form an "umbrella of cooperation" with the "Israeli" apartheid regime to bring the Palestinians to the negotiating table.

The Saudi prince repeatedly denounced "Israel's" presence in the West Bank and said that peace throughout the Middle East would not be realized until Palestinian statehood was achieved. "There has to be a lifting of the occupation," he said. "The Palestinians have to have their own country."

Al-Faisal said the Middle East should remain a "weapons of mass destruction free zone" and that "all options" would be on the table if the Islamic Republic began to move toward the bomb, including Saudi Arabia acquiring its own nuclear weapon capability.

Amidror said he thought Iran would work to build a bomb "toward the end of the agreement. In principle, the Iranians can go nuclear and from the "Israeli" point of view, this is a threat to existence, and we will not let this happen."

While al-Faisal indicated a level of partnership, between Saudi Arabia and the "Israeli" entity when it comes to regional threats, he circled back to the "Israeli"-Palestinian conflict to suggest it obstructed Arab states' ability to work with the "Israeli" regime.

"Cooperation between Arab countries and "Israel" in meeting threats, from wherever they come, whether Iran, is better fortified if there is peace between the Arab nations and "Israel"," he said.

The two also presented similar positions on the situation in Syria, including the reign of Syrian President Bashar al-Assad and the rise of Daesh [Arabic acronym for "ISIS" / "ISIL"].

"We all know what a monster Assad is," al-Faisal told those gathered at the event, emphasizing a collective responsibility for the political and humanitarian catastrophe that has unfolded in Syria. "I blame us all for what is happening in Syria," he said.

Amidror reiterated the "Israeli" position to remain out of the war in Syria, saying that ""Israel" seeks to avoid involvement in the sectarian conflict sweeping the Arab world," but that "the best outcome for Syria is to become free and democratic."

The two former officials also addressed the US role in the region. Moderator Robert Satloff, executive director of the Washington Institute, asked the panelists to discuss a recent series of interviews US President Barack Obama gave with The Atlantic's Jeffrey Goldberg, in which the president articulated a vision of US retrenchment in the Middle East.

Al-Faisal indicated he saw a change in the relationship and the US role in the region and said he believes "there needs to be a reevaluation and recalibration of the relationship." He also expressed some empathy for the president's position: "Americans feel too much used to be expected of them. And they shouldn't feel obliged to take certain responsibilities that they did before."