"Israel" is sparing no effort in its ongoing and desperate attempts at attracting the Arab youth as well as changing facts and falsifying history. As official bodies attempt to stop the spread of distorted ideas, "Israel" began exploiting cyberspace in all its forms. 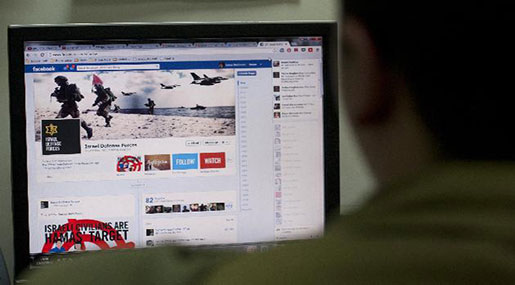 Topping the list are the popular social networking sites "Facebook" and "Twitter", thus transforming the social media into "Israel's" new playground to attract Arab youth, exerting pressure on the Palestinian cause, and consolidating its lies in the Middle East through what can be called the "Electronic Normalization", which has already bore fruit, attracting- in the absence of an Arab response or intellectual confrontation- lots of Arab youths.

Although, the comments are predominantly cursing the "Israeli" occupation forces and advocating and supporting the Palestinian cause, the participation in all its forms, facilitates the spreading of the "Israeli" platforms. This is in itself the goal behind the creation of those pages, which from time to time sees the emergence of comments like "Long live "Israel"" and "On behalf of the people of Baghdad we apologize on behalf of the Arabs for what the bad guys are doing".

""Israel" Speaks Arabic" is another page documented by the management of "Facebook". The so-called "Israeli" Foreign Ministry created it as a source of information about the "Israeli" entity in Arabic. The number of its followers exceeds 600 thousand people across the social networking site.

What is remarkable is the existence of dialogue between the administration of the page and followers. We often find the page management responding to questions and commenting on some of the issues. Unlike most of the comments in the rest of the pages, a lot of comments here are pro-"Israel" and advocate normalization of ties while others express intense desire for coexistence between Arabs and "Israelis" in peace.

The number of followers on the official page of the "Israeli" Embassy, ""Israel" in Egypt", has exceeds 44 thousand people. Its main task is the planting of stories concerning intriguing issues in Egypt, like Pope Tawadros's visit to al-Quds to pay respect to the late Archbishop Abraham al-Urshalimi.

This comes amid the complete absence of Arab confrontation, and the absence of any interest to publish the facts about the history of Zionism and its goals for the future. The result is young people who have no reluctance in announcing their approval for establishing relations with "Israel".