An Egyptian airliner was hijacked and diverted to Cyprus, triggering a hostage situation at Larnaca airport on the south coast, Cypriot police said. Meanwhile, unconfirmed reports claimed that a personal dispute may have been behind the hijacking. 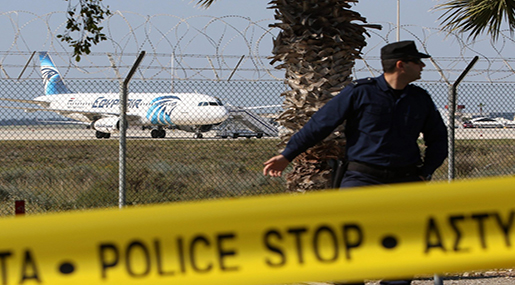 It was not immediately clear if one or more hijackers were involved. However, Egypt's civil aviation authority said the hijacker or hijackers had threatened to detonate an explosives belt.

In later developments, Egyptian authorities named the suspected hijacker who allegedly threatened a pilot with a suicide bomb as Ibrahim Samaha.

State television reported that the Egyptian national is 27 or 28 years old and had been sat in 38K on EgyptAir flight from Alexandria to Cairo on Tuesday morning.

While initial reports claimed the hijacker was demanding "political asylum", Cyprus broadcasting reported that the man may have personal motives and has an ex-wife on the island.

Witnesses said the suspect threw a letter on to the airport tarmac in Larnaca, written in Arabic, asking that it be delivered to the woman, who is Cypriot.

Earlier, Cyprus official informed that the flight landed in Larnaka, with a suspected bomb on board.

Cyprus police said the control tower was contacted at 8:30am and the plane was given permission to land at 8:50 am.

In further details, airport security sources told Reuters that eight Britons and 10 Americans were on the flight.

Eventually, a crisis team was deployed to the airport, the main entry point for tourists to the Mediterranean resort island.

There were no immediate demands and Egyptian passengers were later allowed to disembark, Cypriot state television reported.

So far, negotiations with the hijackers resulted in the release of all the passengers, except the crew and four foreigners, according to the aviation minister.