Four more prisoners are reportedly to be killed by Saudi Arabia as the country moves to "complete" a wave of mass executions that started in January. 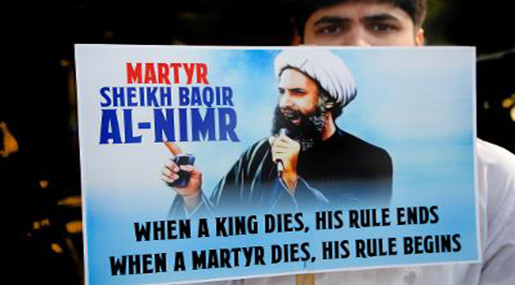 The kingdom put 47 people to death on a single day that month, including the prominent Shia cleric Sheikh Nimr al-Nimr and at least one teenager, sparking global protests.

But articles carried in state-affiliated media ahead of the date claimed 52 people were to die, sparking speculation that some of the executions had been delayed.

Okaz, a liberal newspaper believed to be one of the most-read in Saudi Arabia, reported that four convicted "terrorists" were due to be beheaded imminently on Friday.

"The four terrorists are waiting for the implementation of retribution against them will complete the first batch of 47 on Saturday [2 January]" its report said.

Their punishment has reportedly been endorsed by the requisite 13 judges, who found them guilty of belonging to terrorist groups, carrying out criminal acts and "embracing a takfirist approach contrary to the Quran and Sunnah".

The word "Takfiri" has become a sectarian slur used by Muslims against other Muslims in the Middle East, but is used by Saudi Arabia to describe radical Sunnis who oppose the state's Wahhabist doctrine.

The report did not name the prisoners but human rights group fear they could include three juveniles arrested after attending anti-government protests in 2012.

Ali al-Nimr, Dawood al-Marhoon and Abdullah al-Zaher were aged between 16 and 17 at the time of their arrests and their death sentences were upheld by Saudi Arabia's Specialized Criminal Court last year.

The trio are reported to be members of Saudi Arabia's Shia minority, who face systematic discrimination at the hands of the country's Sunni government.

Ali al-Nimr is the nephew of Sheikh Nimr al-Nimr, the Shia cleric put to death in January after what human rights groups called a "politically motivated and grossly unfair trial".

Amnesty International and Reprieve claim that all three boys were tortured into signing false "confessions" later used to convict them.

The teenagers' families fear they will be executed today, Amnesty reported, accusing Saudi Arabia of "utter disdain" for international laws that prohibit capital punishment for crimes committed by under-18s.

James Lynch, Deputy Director of its Middle East and North Africa Program, called on an immediate moratorium on executions, adding: "Saudi Arabia's use of the death penalty to silence dissent sends a chilling message to anybody who dares to speak out against the authorities."

"January's mass execution included political protestors and juveniles - these prisoners weren't 'terrorists', but ordinary people who lost their lives for the so-called 'crime' of speaking out against the Saudi regime," she added. "It would be appalling if the Saudis now executed three further juveniles who were brutally tortured into 'confessing'.

"The British government and others must look beyond the Saudi propaganda machine, and do all they can to prevent January's outrages from being repeated."

Margaret Ferrier, a Scottish National Party MP, has written to David Cameron asking him to use "any diplomatic channel at his disposal" to prevent their deaths.

It comes after a Saudi official told the UN's Human Rights Council his government "promoted human rights" and "fights torture in all its physical and moral manifestations".

Research carried out by Reprieve last year found that, of those facing execution in Saudi Arabia, around 72 per cent were convicted of non-violent crimes, including drug offences and political protest, while police torture was common.

At least 70 prisoners have been killed so far this year, far exceeding the rate seen last year.

Britain, the US and other governments have vowed to raise the issue with Saudi officials but have been accused of letting opposition slip amid efforts to secure ceasefires in Syria and Yemen.