NATO member-states have coordinated the details of the military alliance's operation in the Aegean Sea aimed at curbing the influx of migrants into Europe from the Middle East, NATO Secretary General Jens Stoltenberg said in a Thursday statement. 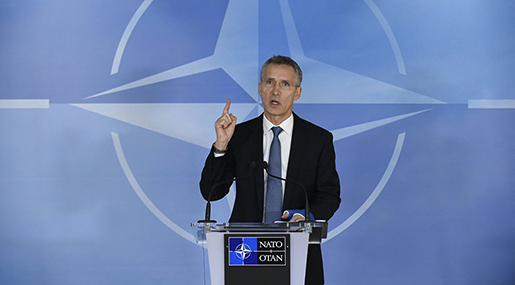 "We will participate in international efforts to cut the lines of illegal trafficking and illegal migration in the Aegean Sea," the statement says, adding that NATO "ships will be providing information to the coastguards and other national authorities of Greece and Turkey."

According to Stoltenberg, NATO's Standing Maritime Group 2 deployed in the Aegean Sea will be conducting reconnaissance, monitoring and surveillance activities in the area and will be maintaining contact with EU border agency Frontex.

"NATO's task is not to turn back the boats. We will provide critical information. To enable the Greek and Turkish coastguards, as well as Frontex, to do their job even more effectively," the NATO chief explained in his statement.

Stoltenberg specified that in case allied ships find people in distress at sea who are coming via Turkey, they will be taken back to Turkey.

Currently, European states are struggling to find a solution to a massive migrant crisis, with hundreds of thousands of people leaving conflict-torn countries in the Middle East and North Africa for Europe.

Earlier this month, Stoltenberg announced plans to deploy NATO ships in the Aegean Sea to combat migrant trafficking into Europe. NATO defense ministers agreed that the military alliance should join international efforts to deal with the refugee crisis and deployed several ships of the Standing Maritime Group 2 to the Aegean Sea.

Stoltenberg said that the military bloc would step up monitoring and surveillance along the Turkish-Syrian border to assist Ankara in managing the refugee crisis.
Turkey is a key transit country for thousands of refugees fleeing conflicts in Syria and elsewhere in the Middle East and heading for Europe.

The European Council concluded in Brussels last week that the flow of migrants arriving in Greece from Turkey remains too high.

According to the International Organization for Migration [IOM], over 78,000 migrants or refugees have crossed into Greece since the beginning of 2016.