Security and school officials reported Wednesday that gunmen attacked a university in northwestern Pakistan, leaving at least three people killed, and are still on the rampage, in the latest assault to hit the militant-infested region. 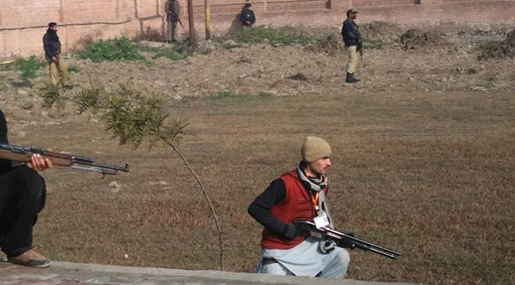 Security forces reached the Bacha Khan University in Charsadda, some 50 kilometers from the city of Peshawar, as police said they deployed armored vehicles at the scene.

Footage showed female students clutching hands as they fled the university, with traffic blocked on the roads of Charsadda as security forces rushed towards the campus.

In parallel, Security Chief at the university, Nick Mohammed, said the attackers entered close to a campus guest house.

He confirmed that police and military arrived with firing continuing on campus, and that at least three people were killed so far.

The exact number of attackers remains unconfirmed, with some reports saying there were eight gunmen and that at least two of them had been killed in ongoing shooting with law enforcers at the campus. The Pakistani Taliban militant group claimed responsibility for the attack.

Peshawar was the location of Pakistan's deadliest ever extremist attack, when Taliban gunmen stormed an army-run school in December last year and killed more than 150 people, most of them children, in an hours-long siege.

The attack on the school prompted a crackdown on extremism in Pakistan, with the military increasing an offensive against militants in the tribal areas where they previously operated with impunity.

Back on Tuesday, a suicide attack at a market on the city's outskirts killed 10 people as well as the bomber.