Iranian President Hassan Rouhani described the nuclear deal with world powers, implemented Saturday in Vienna, as a "golden page" in the country's history. He told lawmakers that it was also a long-awaited opportunity for Tehran's economy to cut its "umbilical cord" to oil. 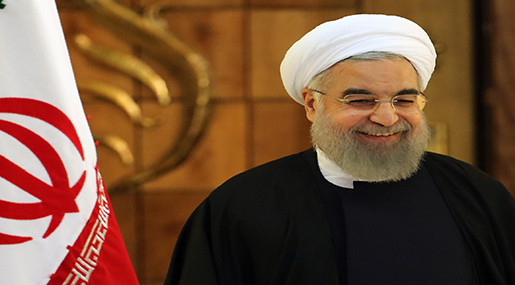 Tehran, which has been shut out of international markets, reemerged from years of economic exclusion, with sanctions crippling Iran's economy finally lifted in return for Tehran complying with a deal to curb its nuclear ambitions.

Iran expects 5 percent economic growth in the next year, which starts in Iran in March, Reuters reported Rouhani as saying on state television. Tehran is now also seeking to attract at least $30 billion in foreign direct investment over the next five years, Rouhani added.

Iranian shares rose to their highest level since August, Bloomberg reported, referring to data on an Iranian website.

On Sunday, a claim by Washington and Tehran was settled at the Hague, which will allow Iran access to $400 mn that have been frozen since 1981, Reuters reported. Iran will also get access to an additional $1.3 billion in interest.

"He has proved both domestically and to the West that he can deliver," Ellie Geranmayeh, an Iran specialist at the European Council on Foreign Relations, told AFP, saying that the deal has allowed Rouhani "to contrast his pragmatic diplomacy" against his predecessor Mahmoud Ahmadinejad's antagonism.

Iran plans to boost oil exports while stocks in the Middle East drop.

The implementation of the nuclear deal also paves way for Iran to boost its crude exports. With nearly 10 percent of the world's proven oil reserves located in the country, preparations for oil exports have already begun, Iranian officials announced.

"Iranian oil supply will come to the market as early as today or tomorrow," Nayal Khan, the Riyadh-based head of institutional equities sales trading at Saudi Fransi Capital, told Bloomberg.

Tehran is working on an immediate increase in shipments of 500,000 barrels a day, Iranian deputy oil minister for commerce and international affairs Amir Hossein Zamaninia said on Sunday, adding that another half million barrels are planned to be added to that figure within months.

Meanwhile, following the easing of western sanctions against Iran and expectations of new oil flows to the market, stocks across the region plummeted on Sunday, Bloomberg reported. All share index at stock exchange in Saudi Arabia, whose oil revenue make up over 70 percent of national income, dropped over 5 percent, to the lowest level in nearly five years.

International companies previously barred from doing business in Tehran will now be able to exploit a market hungry for everything from cars to airplane parts. The US Treasury Department said it will permit foreign subsidiaries of American firms to operate in Iran. The sanctions lifted by the US included a ban on commodities trade for non-Americans, Reuters reported. More specifically, non-US citizens will now be permitted to trade with Iranian government institutions, as well as sell goods and services, such as steel, gold, coal, vehicles and insurance to the country, according to the US Treasury Department.

"The nuclear deal is an opportunity that we should use to develop the country, improve the welfare of the nation, and create stability and security in the region," Rouhani said, addressing the parliament.

The UN nuclear watchdog announced on Saturday that Tehran had abided by an agreement reached with six world powers last summer to curtail Iran's nuclear program. Shortly after, Washington formally lifted key sanctions on Iran. The European Union has also launched the process of lifting its sanctions.

"Iran has carried out all measures required under the [July deal] to enable Implementation Day [of the deal] to occur," the Vienna-based International Atomic Energy Agency [IAEA] said in a statement.

The IAEA certification of Tehran keeping its obligations will allow Iran to immediately recoup as much as $100 billion in assets frozen overseas, AP reported.

While the nuclear agreement lifts only part of Washington's economic restrictions against Iran, with sanctions for Tehran's alleged human rights violations remaining in place, the deal makes two exceptions to the trade embargo. Allowing Iran to buy US civilian passenger aircraft is one of the changes. The second exception specifies an allowance to sell Iranian crafts, such as carpets, to the US.

Rouhani offered reassurance in his comments that the deal would bring positive respects. "The friends of Iran are happy and its competitors need not worry, we are not a threat to any government or nation. We are a messenger of peace, stability and security in the region and the world," he said in his live broadcast on state television.

"Everybody is happy except the Zionists, the warmongers who are fueling sectarian war among the Islamic nation, and the hardliners in the US congress," the Iranian president added.

Iran has repeatedly denied its nuclear program was ever aimed at obtaining an atomic bomb.