Reporters without Borders [RSF] said on Tuesday in its annual roundup that a total of 110 journalists were killed around the world in 2015, warning that more were being deliberately targeted for their work in supposedly peaceful countries. 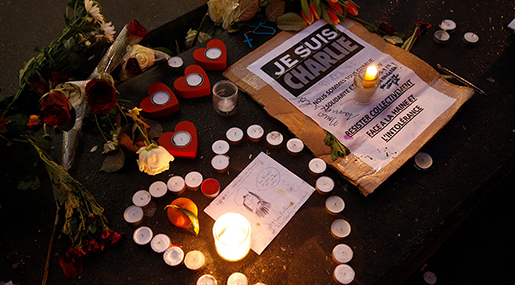 The watchdog group further explained that 67 journalists were killed in the line of duty this year, and another 43 died in unclear circumstances.

Besides, another 27 non-professional 'citizen-journalists' and seven other media workers were also killed.

France was ranked third among the deadliest countries for journalists because of one single act of violence - the attack on Charlie Hebdo magazine.

Yemen, South Sudan, India, Mexico and The Philippines are also high on the list. While journalists in the Middle East risk their lives due to military conflicts and political instability, in India and Mexico organized crime is the biggest threat for reporters, the organization said.

The high toll is "largely attributable to deliberate violence against journalists." It also demonstrates the failure of initiatives to protect media personnel, the report said, calling for the UN to take action.

Relatively, the report shed light in particular on the growing role of "non-state groups," often extremist groups such as "ISIS," in perpetrating atrocities against journalists.

Back in 2014, the group said that two-thirds of the journalists killed were in war zones. But in 2015, it was the exact opposite: "Two-thirds were killed in countries "at peace"."

For his part, RSF Secretary General Christophe Deloire considered "the creation of a specific mechanism for enforcing international law on the protection of journalists is absolutely essential."

'Non-state groups perpetrate targeted atrocities while too many governments do not comply with their obligations under international law.'

"The 110 journalists killed this year need a response that matches the emergency. A special representative of the United Nations secretary-general for the safety of journalists must be appointed without delay," he further stressed.

The 67 deaths bring to 787 the total number of journalists who were murdered, knowingly targeted or killed in the course of their work since 2005, the Paris-based organization said. In 2014, there were 66 such fatalities.

War-torn Iraq and Syria were the most dangerous places in the world this year for journalists, with 11 and 10 fatalities respectively, the RSF report found.

In the same context, UN secretary-general Ban Ki-moon's annual report on the safety of journalists and the issue of impunity on 6 August 2015 stated: "I am deeply concerned about the failure to reduce the frequency and scale of targeted violence that journalists face and the near absolute impunity for such crimes."

Accordingly, RSF has condemned the failure of national governments to provide better protection for journalists and for poor responses to their killings.