European government approval ratings had seen better days, as a significant number of nations in the Eurozone express discontent in the management of their countries, according to a recent YouGov poll. 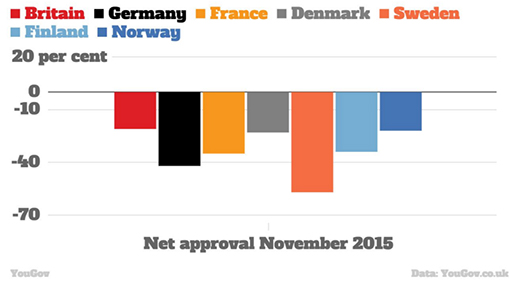 The poll was taken in selected European countries, including the UK, Germany, France, Denmark, Sweden, Finland, and Norway in November 2015.

According to survey results, Swedes turned out to be the most displeased with their government, with France and Germany following. The UK and Norway are among countries with the most appreciated leaders, although they still display negative approval ratings exceeding 10 percent.

The poll results stress a declining trust in European politicians. The shift could be explained by the ongoing economic problems and a major migration crisis in Europe. Similar to 2012 data, the negative trend appears to continuing. Only Norway showed consecutive positive attitudes toward its leaders.

A concurrent poll also provided by YouGov, described as "net stay vote for EU referendum," indicates that Britons for the first time since November 2014 don't support the UK staying in the European Union, in comparison to Germans who remain the strongest supporters of keeping the EU intact.

Following growing anti-EU sentiment in Europe, many had doubted the EU's ability to maintain its existence in its current state.