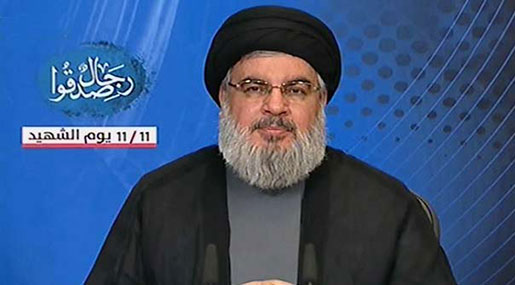 Thousands of people listened to speech on large screens at auditoriums in Beirut, as well as the Bekaa Valley cities of Hermel and Baalbek, and the southern cities of Nabatieh and Tyre.
On the occasion, Sayyed Nasrallah viewed that late Resistance Martyr Ahmad Kassir's operation in 11-11-1982 was the most major one in the "Israeli"-Arab conflict.

"Martyr Kassir truly deserved the title of Prince of martyrs, because he was at the forefront and held the people's pain."

His Eminence further thanked the Resistance martyrs for all what they had did and offered for our nation.

"I thank the martyrs for their sacrifices in the sake of our nation and future generations I do not speak of Hizbullah's martyrs solely, but also of the martyrs of all the Resistance factions as well as the Lebanese and the Syrian armies," he mentioned.

According to the Resistance Leader, "One of the most important achievements attained by the blood of the martyrs is the spirit of jihad, Resistance , martyrdom, pride sent by the martyrs to our people and the peoples of our nation in addition to independence and freedom."

"Our enemy is trying hard to affect this spirit, and it's our responsibility to preserve it," Sayyed Nasrallah stated.

In addition, His Eminence saluted the martyrs' families for their sacrifices. "When we have such families then we are not afraid of any enemy... we are certain of victory."

Commenting on the continuous "Israeli" threats against Lebanon, Sayyed Nasrallah assured that we are enjoying security in the South due to the equation of deterrence in the face of the "Israelis" and the achievements that have been made against the takfirist.

"This this has been reached through the blood of the martyrs," he elaborated.

On this level, Sayyed Nasrallah ruled out any imminent "Israeli" attack on Lebanon because the apartheid entity is fully aware of such step's high cost.

However, Hizbullah Secretary General warned that there is a war to tarnish the image of the Resistance. "It is our responsibility to fight this war and safe-keep the Resistance in order to liberate the rest of the land and to deter any aggression."

"Martyrdom is our mightiest weapon against the arrogant enemy," he reiterated.

On the regional level, Sayyed Nasrallah highlighted that his party stands on the right side of history.

According to His Eminence, "the Zionist entity will not be able to stop the Palestinian intifada as long as its fractions remain united and maintain courage in the face "Israel"."

"The enemy forces can fragment the Palestinian territories, but it cannot prevent young men and women in Palestine from attaining knives," he stressed.

Commenting on the recent meeting between US President Barack Obama and "Israeli" PM Benjamin Netanyahu, Sayyed Nasrallah underscored that "the United States has always adopted a firm stance regarding its support to "Israel"."

"The Americans are not ashamed of supporting Tel Aviv," he said, pointing out that "Netanyahu-Obama meeting in White House assures Washington's commitment to "Israel's" security."

The Resistance Leader went on to say, "we are proud that Obama and Netanyahu discussed Hizbullah in their latest meeting ... It means that we are in the correct place in the region's equation."

He also stated that the Lebanese Resistance movement plays an influential role in the region. "When Obama and Netanyahu talk about Hizbullah, this means that we are influential."

Moving to the regional conflicts, Sayyed Nasrallah emphasized that "the developments in Syria and Yemen proves that the military action cannot settle the crises in these countries."

"The steadfastness on the ground proves that the battle will not end in the favor of those who are operating against the will of nations in Syria, Iraq and Yemen," he predicted.

On this level, His Eminence explained that "the fighting spirit of the army and the volunteer forces in those countries brings a clear message to the enemies that the people of Syria, Iraq and Yemen will not relent in their determination to rid their countries of terrorists."

"In Syria," he said, "the US and its allies should accept a political settlement of the crisis without any preconditions."

Regarding the Syrian army's achievements on the ground field, Sayyed Nasrallah confirmed that "breaking the siege of Kwairis airport after two years, demonstrates the will of fighting that the Syrian army's officers and soldiers have."

"Lifting the siege on the Kwairis airbase is a message to America and its allies that the solution is a political one."

On the internal front, Sayyed Nasrallah slammed the level of deterioration that the country has reached.

"The situations that we have reached in Lebanon reflect an evasion of responsibility and the parties are trading barbs and awaiting the instructions of foreign forces," he said.

As His Eminence viewed that "all sides must attend tomorrow's legislative session because it is in the interest of the country," he called for a "comprehensive political settlement" over the issues of the presidential vote, the next government and the electoral law.

"A national settlement means one whereby all sides give and take," Sayyed Nasrallah said, noting that, "a country with no real reference to resolve disputes cannot manage a crisis."

He also slammed the fact that "there is irresponsibility in the management of the crisis in Lebanon and a dispute on a single matter which will fragment the country."