A suffocating sand storm hit Lebanon Tuesday, leading to four deaths and 750 cases of asphyxiation or shortness of breath in the northern and eastern parts of the country, the Ministry of Health announced. 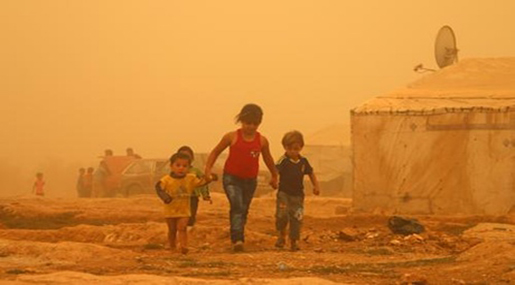 The Lebanese Red Cross said earlier that the sand storm led to around 130 cases of asphyxiation or shortness of breath in the northern and eastern parts of the country.

Dust and fog enveloped the capital Beirut and other parts of Lebanon, leading to reduced visibility on major roads.

A source at Beirut airport told The Daily Star the storm could delay flights but the impact is still uncertain.

Lebanese Red Cross called on citizens who have asthma to stay indoors.

"We advise citizens who suffer from asthma to stay home," Lebanese Red Cross wrote on its official Twitter account.

The Health Ministry also urged citizens who have allergies, chronic pulmonary or heart disease as well as the elderly, children and pregnant women to "stay home and avoid exposure to dust" or wear face masks if they do venture outside their homes.

The storm disrupted daily life in an unprecedented fashion, closing down most businesses and restaurants in the northern city of Tripoli.

The yellow-tinted skies prevented residents of the northern Akkar province and the Baalbek-Hermel district in the east from their daily commute, as cars and homes were covered in a thick layer of sand.

The weather department at Beirut airport said the storm, coming from Iraq, will continue throughout the day with chances of rain in the northern Bekaa Valley around midday.