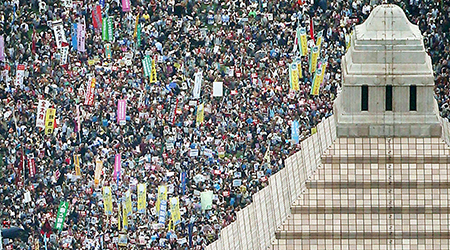 Masses of people in Tokyo flooded the street in front of the parliament's main entrance and surrounded the building. A nearby park was also swarming with demonstrators. Despite being present in heavy numbers, the police were unable to restrict the demonstrators to the sidewalks because of the size of the crowd.

Protesters of all ages, ranging from young people to the elderly who had witnessed WWII, braved the rain to participate in the rally. Many people arrived with their children. The demonstrators were singing songs, shouting slogans and waving banners and placards as they demanded that the bill be defeated and Shinzo Abe leave office.

Sunday's rally, which was organized by several protest groups, was among the most massive protests in Japan in recent years, with organizers putting the number of participants at 120,000. Japanese police estimated that only 30,000 protesters came to the parliament building.

"We need to make the Abe government realize the public is having a sense of crisis and angry. Let's work together to have the bills scrapped," Katsuya Okada said addressing the demonstrators.

Furthermore, many protesters expressed their frustration to the media, along with their reasons for attending the rally.

Sunday's Tokyo rally, as massive as it was, was only one of more than 300 protests staged in Japan over the weekend to say ‘No' to what the demonstrators call a violation of the constitution.

The weekend's wave of rallies was just the latest in a series of protests that began after a controversial bill proposed by Shinzo Abe's government was pre-approved by the lower house of the country's parliament in July.

An earlier wave of mass rallies protesting the bill was held across the country on August 23.

On Thursday, a group of Tokyo university students started a hunger strike outside the parliament demanding the abolition of the legislation, claiming to be determined to continue the strike as long as possible, as reported by the South China Morning Post.

If passed, the bill would allow the Japanese military to take part in foreign operations, even if Japan is not directly threatened, for "the protection of the allying countries," which it does not specify. It would also expand Japanese participation in UN missions, and enable Self-Defense forces to lend logistic support to the US and other "friendly nations."

The bill has been welcomed by the US, which is seeking more support from its Asian ally, but was met with disfavor by China and South Korea, which are engaged in territorial disputes with Japan.

The Japanese public had consistently opposed the bill, with the latest poll conducted by the Kyodo news agency suggesting that almost 70 percent are against it receiving final approval.