Iran has set the cause of fighting terrorism before its eyes, relying on cooperation with the region's countries. This is what Iran's Foreign Minister Mohammad Javad Zarif tried to explain during his trip to the [Persian] Gulf countries, and what Iran's Ambassador to Lebanon Mohamad Fathali emphasized on Thursday, stressing in an interview with al-Akhbar newspaper that "Iran today stands at the forefront of confronting takfiri terrorism and the Zionist threat." 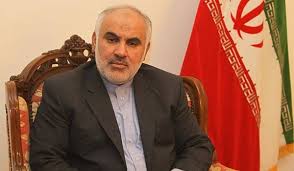 In Iran, when people talk politics, they do not finish their discussions before tackling the nuclear deal between Tehran, the P5+1 countries and the European Union.

This agreement is a pivotal station when it comes to Iran's foreign policy; and the situation before and after the deal is not the same, for certain. Iranian diplomacy describes it as an accomplishment, but does not rush into investing it in the Middle East region.

Iran's ambassador to Lebanon, Mohammad Fathali, views that the practical interpretation of this "accomplishment", its implications, and repercussions in the region is a very ‘delicate' matter over which a big question mark remains.
He went on to say that there are three dimensions to the agreement that should be dealt with: "First, the nature of the agreement, second, its implications and consequences as well as the reactions to it in the region, and third, how it will be executed."

"The deal is not ‘The Solution' to the region, but rather a solution to one of the issues in the region," said the ambassador.

When asked about the complexity of the issues including the nuclear issue and the regional problems, he noted that the region faces common threats and dangers and these are posed by "the Zionist occupation and its aggressions against the oppressed people in the Gaza Strip, as well as the extremist and terrorist criminality against humanity practiced particularly by the terrorist groups in Iraq and Syria."

Fathali stressed "We will never give up on these causes under any circumstances," pointing out that such is what the Supreme Leader of the Islamic Republic of Iran, Sayyed Ali Khamenei has declared and that he has reiterated "Iran's commitment to defend the resistance and its honest and sincere forces, and to confront ‘ISIL' and extremist groups."

Tehran's ambassador to Lebanon assured that the nuclear agreement was a result of "the steadfastness of the resistance front in first place, which will definitely have positive consequences on the entire region," especially in terms of fighting terrorism and confronting the Zionist entity.

From his perspective, the reactions to the nuclear deal in the region are encouraging, in reference to the Iranian Foreign Minister, Mohammad Javad Zarif's visit to the Persian Gulf countries.

"We worked seriously to demonstrate and explain the positive impact of this deal on the countries of the region, and we believe that our accomplishment is as such for the region as a whole," Fathali said, adding "currently, Iran is at the forefront when it comes to combatting and confronting takfiri terrorism, and whether we like it or not, Iran is at the forefront in terms of the resistance front confronting the Zionist entity."

As for the Saudi stance on the deal, the Iranian diplomat wished that "the Saudis understand that this deal is also an accomplishment for them." He expressed his hope that "there would be positive implications on the ground in the near future."
"I think that the entire region is confronting numerous and different difficulties... We have to unite efforts to confront the danger of takfiri and ‘Israeli' terrorism," the ambassador highlighted.

When it comes to Syria, the priority in Iran's politics is confronting terrorism: "currently, all the countries of the region and all the free peoples of the world know well that the crisis in Syria is not a civil war," adding "we had declared that this takfiri danger is a threat to the region as a whole, and we have to face it."
Commenting on the latest Turkish stance on Syria, as Ankara declared its intention to set up a ‘safe zone', free from "ISIL" groups or any of the Kurdish armed forces in the Northern outskirts of Aleppo, Fathali affirmed that "the threat of takfiri terrorism is a threat to all the countries in the Middle East similarly," adding "according to my personal impression, and this is not an official position, we hope to see Turkey reconsidering things and recalculating its stance."

On the Lebanese level, Fathali hoped that the lifting of unjust sanctions on Iran would coincide with the lifting of the many obstacles that impede progress in the economic relations [of the two countries]. On the means of benefitting from the economic relations, Fathali highlighted that Lebanon enjoys a major banking sector and outstanding tourism system, at the time Iran enjoys different economic capabilities as well.

The reaction of Lebanese officials on the nuclear deal is positive in his viewpoint; deducing such a conclusion from the many meetings he had held with high-ranking Lebanese officials including Lebanon's Prime Minister Tamam Salam, House Speaker Nabih Berri, Head of the Change and Reform Bloc General Michel Aoun, and Amine Gemayel. He explained that Lebanese officials "think this deal should be invested."

Answering a question on whether communications or discussions were taking place with Tehran on electing a president in Lebanon, the ambassador tuned back to diplomacy saying "this is an internal Lebanese issue," expressing that he thinks "all parties in Lebanon should be concerned about this matter because it directly affects the interests of the people, and they should reach consensus on this matter."

Returning to the nuclear deal, Fathali assured that since the beginning, the talks were "only limited to eliminating suspicions on the nuclear program that were claimed by the other side."

The negotiating team, throughout the negotiations, especially through the talks with the Americans, did not tackle any issue other than this particular one, according to Fathali.

Therefore; he noted that "discussing the nuclear program and the other issues of the region at once is incorrect, because the wall of mistrust between Iran and the United States has grown really high and that the issue of resistance and confronting terrorism remains to be a point of disagreement because of a crucial difference enrooted in an ideological principle."

On the possibility of Iran joining the ‘Coalition to Confronting Terrorism, Fathali wondered "about what so-called coalition are they talking? Is there really any coalition to confront terrorism?"

He concluded "the first condition to confront the terrorism of ‘ISIL' is to cut off its economic, ideological, and financial resources."