Hizbullah Secretary General His Eminence Sayyed Hassan Nasrallah delivered Friday a speech in which he tackled a number of regional and internal issues. 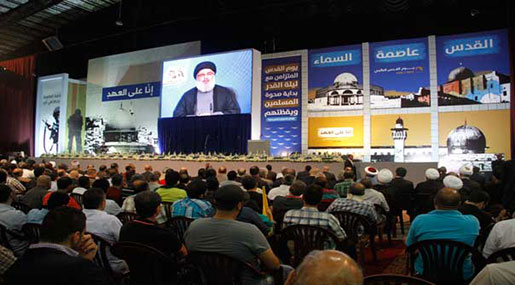 His Eminence made the remarks in a televised address marking al-Quds International Day, as designated by the late founder of the Islamic Revolution His Eminence Imam Khomeini.

"Imam Khomeini's goal was to keep the cause of al-Quds alive by designating al-Quds Day."
On the event, the Resistance Leader hailed Praising the Yemeni and Bahraini people, who despite their sufferings went out to confirm their jihadi, ideological and political commitment to the issue of Palestine.

He praised the fact that al-Quds Day was also commemorated in Bahrain despite the continuous crackdown against its people from the ruling dynasty as well as the terrorist "ISIL" threats.

Moving to Yemen, Sayyed Nasrallah stated: "Despite the continuous Saudi-American aggression against Sanaa, tens of thousands took out to the streets and rallied for Jerusalem, Palestine and Gaza," he stressed.

In parallel, he lamented that "the Yemeni people feel that the world has turned its back on them."
"The war against Yemen today is the biggest service Saudi Arabia can do to Israel," he said. "And it is coming free of charge."

Sayyed Nasrallah further mentioned that "the Saudi war on Yemen is now being fought without any political objectives and it only aims to take revenge on Yemen and its people."

Moreover, His Eminence stressed that "if Yemen becomes sovereign, free, independent and governed by the will of its people, it would become a resistant country that is part of the axis of resistance, which would pose a strategic threat to "Israel"."

According to Sayyed Nasrallah, ""Israel" the mother of all terrorism presents itself as a force fighting terrorism."

"Some Zionist leaders are trying to convince the world to officially acknowledge the annexation of the Golan into the Zionist entity," he warned, noting that ""Israel" is the root of terrorism, and the entity that was established by terrorist organizations is trying to present itself as a force fighting terrorism."

Enemy of Iran, Enemy of Palestine

On another level, Sayyed Nasrallah confirmed that "Israel's" main objectives are targeted against Iran.
""Israel" knows that the takfiri scheme, which is sponsored by some Arab regimes, is destroying the countries that it wants destroyed," he added.

Regarding the "Israeli" fear from the Iranian steadfastness and strength, Hizbullah Secretary General emphasized that " once Syria was plagued by conflict, the enemies focused on Iran and the resistance movement as the remaining greatest threats."

"Iran is the only country that, in the mind of the "Israeli" officials, poses an existential threat to "Israel"; thus, they seek to incite the entire world against the Islamic Republic."

In addition His Eminence acknowledged: "Because Iran represents a threat to "Israel", military wars were waged against it in the past, and now it is facing a psychological, media and economic war, and Washington's allies in the region are taking part in these wars."

He stressed that the Resistance movement proudly poses a strategic threat to the Zionist entity. "However, it has not reached a level to pose an existential treat" to "Israel"."

On this level, His Eminence asserted that the question must be asked why this "complete enmity" is being directed at Iran and not against Arab countries. In response, Sayyed Nasrallah highlighted that the Zionist entity realized that Arab officials do nothing for the cause of Palestine and Gaza.

"Aren't they part of the Islamic nation? Are the Palestinians not Muslims?"" Sayyed Nasrallah asked.

"Imam Khomeini's Iran, the Iranian government and people under the leadership of Imam Sayyed Ali Khamenei will never recognize "Israel"," he said.

"If the entire nuclear deal hinges on the precondition of acknowledging "Israel" as a "state", the Iranian republic and its people would never accept such a condition, because they would be renouncing their religion if they accept such a stance."

Sayyed Nasrallah further underlined that "the only hope left for this region, after God, is the Iranian republic and its support for the resistance movements in the region."
"Any talk about a Shia crescent is a lie by corrupt Arab officials," he said, adding that Iran is an ally of Arab countries.

On this level, His Eminence clarified that "the claims that there is a Persian scheme are aimed at diverting the attention of Muslims from the Palestinian cause. Any talk of a Shiite crescent is a lie fabricated by the corrupt Arab system, which has abandoned Palestine."

Commenting on the developments in Syria, Sayyed Nasrallah asserted: "Syria is defiant and it will remain steadfast."

"Our Resistance fighters who fall in Syria are dying for the sake of the resistant Syria, Lebanon and Palestine. The road to Occupied al-Quds does not go through Jounieh, but it goes through Qalamoun, Zabadani, Daraa and Hasakeh, because if Syria is lost, Palestine would be lost."

Reiterating Hizbullah's condemnation to the recent terrorist attacks against the Kuwaiti mosques, Sayyed Nasrallah hailed Kuwaiti response to these attacks.

"The bombing in Kuwait was meant to incite sectarian conflict in the country, but to no avail, as the country's emir, government and scholars prevented such a scenario from playing out."

Not to Leave Aoun Alone

Moving to the internal front, Sayyed Nasrallah highlighted that "Weeks ago, it was obvious that the country was heading towards a clash over the issue of government and the Free Patriotic Movement [FPM] is a key party in the equation."

"Aoun is raising legitimate demands. Some parties believed that the allies do not share the same stance and that Hizbullah is preoccupied in Syria and that Aoun was alone. We insisted on consensus in the cabinet and we did not need to reach this extent."

However, His Eminence stressed that "Aoun's allies have not abandoned the FPM. Some parties tried to drive a wedge between the allies."

In response to such fabrications, he unveiled that " Aoun never asked Hizbullah to join its street protest as he is fully aware that Hizbullah's participation not in FPM's interests."

Meanwhile, Sayyed Nasrallah voiced his backing of Aoun's demands to respect unanimous consent as a condition for any decision in the Cabinet until a president is elected.

"We are not giving up on any of our allies, and particularly not on Gen. Aoun and the FPM," he said. "Our options are open. Don't assume that we won't not do some things, everything is possible. I am not threatening, but this is how we behave."

He also assured that neither Aoun nor his allies want to topple the government, because that would plunge the entire country into vacuum.

"Lebanon needs its civil peace, institutions and coexistence, and it has no room for elimination, exclusion or monopolization, and partnership is our destiny," His Eminence concluded.