The Arab nation and its people are burning in the fire of ignorance ignited by merchants of religion, Takfirism and terrorism. Still, al-Quds [Jerusalem] and Palestine - the main Cause - remain absent from Arab politics, ideology and media, in favor of strife and bloody Takfiri wars. 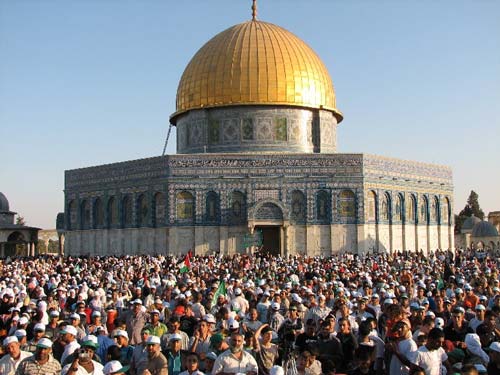 This year, the International Quds Day which was declared by the late Leader of the Islamic Revolution His Eminence Imam Khomeini on the last Friday of the Holy month of Ramadan comes amid Arab destruction and devastation.

"Israel" and its agents were able to widespread strife and bloodshed in most of the Arab countries under various slogans as each group was preoccupied with finding its own security and interests far away from its nation's security or the Main Arab Cause.

Palestinian writer and political researcher Saqr Abu Fakhr pointed out that "al-Quds is nearly orphaned". He believes that "the Palestinian Cause has become completely absent from the cultural, political and intellectual effort in the Arab region due to the outbreak of fire and the systematic destruction of all that has life in this country."

According to Fakhr, the arson targeted "the doctrine that resisted the Zionist enemy and defended the Arab rights which is now being completely leveled in favor of sectarian wars being planned for decades."

Nonetheless, Takfiris, who rampaged on the capabilities of Iraq and Syria, deliberately destroyed religious shrines and mosques as well as Christian churches and Yezidi symbols excluding any Jewish property; the Jewish synagogues in Mosul and areas in northern Syria were untouched.

In the Syrian Palmyra, for example, which the Takfiris controlled for a fairly long time, stands a Jewish temple safeguarded by terrorists; Although they did not leave any religion shrine or sacred symbol untouched in Iraq, Syria and Yemen.

Meanwhile, Abu Imad Ramez Mustafa, head of the General Command of the "Popular Front for the Liberation of Palestine" in Lebanon indicated that figuring out "who is behind these groups internationally and regionally as well as who is supporting, financing and facilitating the path for these groups" will resolve this paradoxical situation.

He believes that "ISIL", "al-Nusra Front" and the rest of the Takfiri groups are ready to follow orders exempting orders related to the Palestinian Cause, on the grounds that "the main objective of the happenings in the region was fortifying American interests and the imposition of the Zionist entity regionally as being the strongest among the countries whose national bonds are dissipating and being crushed in light of what was going on."

Indeed, Mustafa is backed by Fakhr through his assertion that "the so-called "Islamist extremist groups" did not mention Palestine at all in any old or recent literature" citing the "Islamic Hizb ut-Tahrir" [Party of Liberation], founded by the Palestinian Taqi al-Din al-Nabhani, which only referred once to Palestine in its statement of identification and objectives.

Fakhr also believes that "these Takfiri movements disregard any consideration for national issues as they consider that the Palestinian Cause is one of the problems of Muslims all over the world". He indicated that "these movements are solely interested in power under the name of the so-called announcement of the Caliphate [succession] or the declaration of a so-called "Islamic state" that governs by Islamic law [Sharia]." Fakhr adds that "they are not concerned with the Palestinian Cause, the issue of al-Aqsa Mosque or al-Quds."

Alternatively, Mustafa considers that "the strategic goal of all what is happening in the region is to eradicate the Palestinian Cause." In fact, Fakhr emphasizes that the supporters of these terrorist groups are "Turkey and Saudi Arabia," shedding light to the "strong ties with "Israeli" intelligence and that Mandi Safadi is the one coordinating these activities; today, the revelation concerning these relationships that we know much about has begun," citing as an example "that they have constantly met with the Zionist Bernard-Henri Levy who called for the bombardment of Gaza."

Hence, in the midst of the dark Arab reality, Fakhr asserts that "as long as the Palestinian people are united on their land and resistive of the occupation, the Zionist-Arab conflict will not end at all." A confirmation offset by Mustafa's invitation of the warring Arab peoples "to return to the true destination and redirect the compass towards Palestine and al-Quds, because there is no spring, prosperity or development as long as Palestine is usurped by the Zionists".

Mustafa adds: "We, as Palestinian resistance particularly in the Popular Front - the General Command salute the late Imam Khomeini as he was well aware of the true meanings of declaring al-Quds Day in the last Friday of the holy month of Ramadan," calling on the "Arab nation to be sensible for the reason that the nation's salvation lays in the annihilation of the Zionist entity perching on Palestinian territories."

Subsequently, Fakhr considers the International Quds Day "a very important day in refreshing one's memory and reminding the Palestinians that there are people standing by them and keeping the Palestinian Cause alive. Al-Quds Day is very important so as we won't be crushed by these creatures that are destroying our civilization and history in the Arab region."

The head of the Popular Front for the Liberation of Palestine in Lebanon conveys three messages; the first to Iran "that stood and still stands on our side with its leaders, people and Imam. We tell it that we stand with and by you, too." The second message addresses "our Palestinian people everywhere. We tell them that we should restore the option of resistance and purse Palestinian unity because the continuation of this obnoxious division is an opportunity for the Zionist entity."

Eventually, in the third and final message, Mustafa addresses "the Resistance in Lebanon which is nearing the victory celebration of July 2006 that Palestinian people will remain by the side of the Resistance that triumphed for the sake of Palestine and the Palestinian Cause" expressing hopes "of celebrating International Quds Day in the Palestinian State's capital, al-Quds".