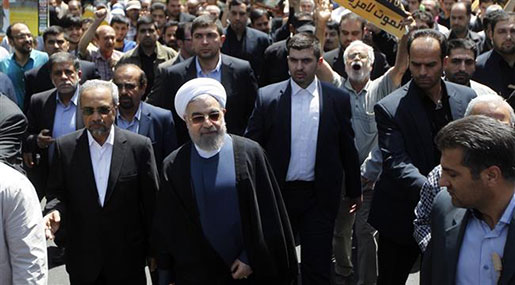 Addressing Tehran Friday Prayers on International Quds Day, Larijani said the West has been seeking to destroy all Muslim nations beginning with Palestine.
The senior Iranian official said that the West has been pursuing the ultimate objective of destroying Islam.

Larijani added that differences among certain Arab countries has helped Israel survive.
"The 1979 Islamic Revolution in Iran changed the strategy of Muslims in standing up to "Israel"," he stressed noting that "Iran's eight-year sacred defense against Iraq and the Islamic Republic's resistance against West was a source of inspiration for other Muslim nations."

The top parliamentarian underlined that the development of nuclear technology is a major achievement that Iran has made without the West's help.
He further said the failure of talks on Tehran's nuclear issue will be a strategic mistake and not in the West's interests.

Meanwhile, Iranian officials, including President Hassan Rouhani, also joined the rallies to show support for Palestinians in the face of the entity's crimes and atrocities.

Rouhani told reporters that International Quds Day is the day of renewing allegiance to the Palestinian cause and the holy city of al-Quds.

"Today there are divisions and rifts in many countries, and terrorists are making it hard for people to live, which is undoubtedly supported by the Zionist regime and hegemonic powers," Rouhani said.

Macron: What is going on is a political, economic and moral crisis that the Lebanese people are paying for
Macron: Today is an occasion for dialogue and discussion with those involved in the Lebanese political situation
Macron: At the European level, we will provide more unconditional aid to Lebanon
Macron: I came immediately to affirm our support for Lebanon after Beirut Port’s blast