Hizbullah Secretary General His Eminence Sayyed Hassan Nasrallah delivered a speech in which he tackled various topics, on top of which the security developments.

Addressing the large crowds via video link in the 30th anniversary of al-Mahdi Scouts, Sayyed Nasrallah commented on the drills the Zionist entity launched in the recent days. 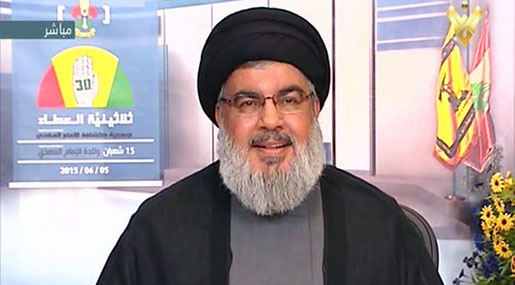 Millions of Settlers to Be Displaced

"There is a unanimous stance in "Israel" that they lost the 2006 war, although in Lebanon some claimed that "Israel" won," he said, noting that "there is a new thing i.e. the drills on the Zionist entity's home front."

His Eminence further highlighted the "Israel" was forced to hold maneuvers on the internal front.

On this level, the Resistance Leader emphasized that "after the July war, the "Israeli" army discovered that it was defeated and that any assault will receive a harsh response on their home front and in the depth of the depth."

"They are launching military drills on the home front because they are well aware that the resistance can reach their entire internal front," he clarified.
"Since its establishment the Zionist entity was founded on threats, intimidation, killings and massacres," he elaborated.

In parallel, His Eminence stressed that ""Israel" used to fight its war on our soil, but in the July war and the Gaza wars the war moved to the enemy's territory, which forced it to do domestic front drills."

"During the latest drill, some "Israeli" officers addressed threats to Lebanon and said more than a million Lebanese will be displaced, but this is part of a psychological warfare," Sayyed Nasrallah assured.

To the Zionist entity, Sayyed Nasrallah sent a clear message: "Your threats are not new and they are repeating themselves ... I tell the "Israelis" that the world has changed and the proof is their drill."

In this context, Sayyed Nasrallah addressed the "Israelis" by saying: "We do not fear your war or threats, and nothing has changed if you believe that we are preoccupied with Syria."

Moving to the new achievements of the Islamic Resistance in the Arsal outskirts, His Eminence reiterated that in his latest speeches he distinguished between the town and its outskirts.

"No one said that we want to enter Arsal. This town is occupied by the takfiris and the responsibility for regaining the town falls on the state and the army," he asserted, denying all media and political claims on this level.

According to Sayyed Nasrallah, "in the issue of Arsal's outskirts we were clear. But what happened after that was an example of political hypocrisy and deception and malicious and cheap political exploiting."

"Some people invented a battle called the town of Arsal and started talking about it and started claiming that they were defending Arsal's resident," he added, reiterating that "we do not have the intention to enter Arsal and this is the responsibility of the state and the army."

"We are not invaders. We are resistors and liberators," he said.

On the cabinet's decision over Arsal, His Eminence stated that "there is a clear decision that the Lebanese Army is responsible to regain this town and to protect its citizens."

"This title of Arsal, the town, has been pulled from the political speech. Things are now in the custody of the Lebanese Army and locals are looking to the military leadership to shoulder its national responsibility."

As His Eminence unveiled that "dozens of square kilometers of Arsal's outskirts have been liberated by the Islamic Resistance in the past few days," he hailed the efforts of the great and heroic Resistance Mujahedeen and their martyrs and wounded.

He also revealed that "what expedited the battle of Arsal's outskirts was al-Nusra's attack on our Syrian Army and the Resistance's positions."

"Hizbullah Resistance men have liberated swathes of territory that were occupied by the takfiris in Arsal's outskirts and a major progress occurred in Flita's outskirts. The latest achievements will give your brothers in the resistance and the Syrian Arab Army the upper hand, whether in Qalamoun's outskirts or in Arsal's outskirts," Sayyed Nasrallah said.

In addition he refused to talk about the battle's details or set a deadline for the Arsal outskirts' confrontation. "The Resistance's military leadership will set the time line and the battle will speak for itself," His Eminence underlined.

"The battle of Arsal's outskirts would greatly ease the burden on the Lebanese army and facilitate the steps that the state and the people have asked the army to perform."

He urged the government to deal with the issue in a serious manner, wondering: "Who is creating lies and illusions to re-establish itself in a certain area and call itself a protector and leader, even at the expense of religious and sectarian incitement?"

As His Eminence discussed the recent meetings held by the Bekaa tribes over the takfiri threats, he stressed that "Hizbullah does not intend to form popular brigades or "popular mobilization forces."

Sayyed Nasrallah saluted the communities and tribes from Lebanon's northern Bekaa for their "awareness and correct understanding of the threats" posed by the terrorists, as well as "their willingness to make sacrifices."

"At this stage, we need popular solidarity and support and we don't need fighters to achieve our objectives," he said, announcing that "until the moment, there is no need for "popular mobilization forces" or a general popular mobilization."

His Eminence mentioned that "the men of the resistance who are fighting in the mountains are the sons of these tribes, families and villages."

On the takfiri "ISIL" terrorist group, the Resistance Leader clarified that the group was originally formed in Iraq, and later spread to Syria.

Sayyed Nasrallah said the terrorist group split from the al-Qaeda terrorist group, which was itself created by the US, Saudi and Pakistani intelligence agencies.

"Everyone considers the "ISIL" a global threat rather than a threat against a certain region or minority. However, we in Lebanon have to argue over whether or not the "ISIL" represents a threat, as if Lebanon is not part of this world."

Regarding this issue, His Eminence warned that ""ISIL" does not exist only in Palmyra, al-Reqqa, or Mosul. They are located in Arsal's outskirts also."

Out of the goals declared by Saudi Arabia in the military aggression against Yemen, Sayyed Nasrallah said, none were achieved.
"Yes, they killed, they destroyed... criminal gangs can do that; aside from that, none of the declared goals were achieved," he said.

On this level, he urged the Saudi kingdom to end its aggression against and the blockade against Yemen.

"The only solution is that the KSA ends its aggression on Yemen," Hizbullah Secretary General concluded.