After the outstanding number of victories achieved by the Syrian Arab Army and Hizbullah in Syria's hot zones, starting with the battles to liberate Qusayr in the summer of 2013 to the battles of Qalamoun in the Spring of 2015, it became normal that these victories spread hysteria amongst many of the enemies of the Syrian state and Resistance movements in the region. 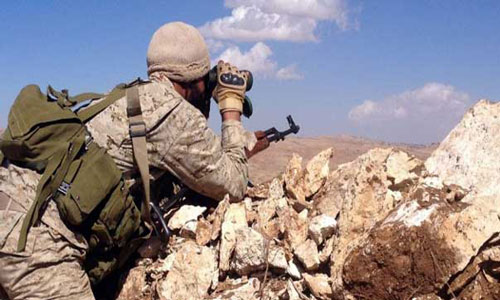 Facing this relapse, they decided to pour their anger out on Hizbullah, whose decision to interfere in the ongoing battles in Syria fell within its political and combative path as an armed resistance movement.

Hizbullah was able to justify its siding with, and defense of the Syrian state as part of the strategic and security relationship they share, considering what the Syrian state represents, in terms of defending the Lebanese and Palestinian Resistance.

It was according to these principles that Hizbullah marched along the road it saw fit, at harmony with its own position and political and ethical principles. Therefore it intervened militarily, and began resolving matters on the field, in cooperation with the Syrian army.

One of the main battle Hizbullah's combatants are fighting head-on in defense of the axis they belong to is the battle of Qalamoun. It is an open war with regards to its space, time, and stages, wherein they were able to inflict great defeat upon the armed groups, as Hizbullah's Secretary General His Eminence Sayed Hassan Nasrallah had confirmed.

Hizbullah, who was also fighting a fierce war against a mix of fighters from the so called "FSA", "al-Nusra", and "ISIL", achieve a string of victories and defeat upon the armed groups of the region enveloping the Qalamoun Mountains separating Lebanon and Syria. These same victories enabled Hizbullah to expel these armed factions aimed at Hizbullah's presence in the South of Lebanon, and open a direct route between Lebanon and Syria.

This was also confirmed by the American "Foreign Policy" magazine in a report it published the day before yesterday. The report confirmed that Hezbollah's combatants seized 120 miles of Lebanon's border areas, expelling al-Nusra militias therefrom.

The Magazine added that Hizbullah is at this stage fighting a series of large regional battles, as he is fighting in Syria, whilst simultaneously waging a political and media war against Saudi Arabia for its war on Yemen, as well as participating in other wars, in different forms, both in Iraq and in its conflict with its mortal enemy, the Zionist entity, through the special relationship it enjoys with the Palestinian Resistance.

Hizbullah, who over the last years has succeeded in increasing its military, security, and logistic capabilities, and whose fighters have gained great fighting expertise, still considers that the battle with the Zionist enemy to be the main battle and its preparations are ongoing to face the "Israeli" army in any battle.

Sayed Hassan Nasrallah has said it when he declared that "the Resistance has not suffered any weakness, shortcoming, or debilitation and neither its ability nor its readiness to face the "Israeli" enemy has been affected".

By entering numerous battlefields, Hizbullah has gained much experience and has turned into a great regional power. It has now become the main concern of decision makers in Western states, whose military strengthening has become the subject of a number of military and political American and "Israeli" report, which consider this a great setback for the rebalancing of power in the region.

With Hizbullah's logistic force, its deterrence, and the great discipline of its combatants, observers note that it has a rising regional role. It has become a main element in a regional axis that can engender great change in the balance of power amongst the different parties of the region's conflict.