Security forces stormed on Monday the overcrowded Roumieh prison, including block B that contains the extremist prisoners, in search for illegal items. 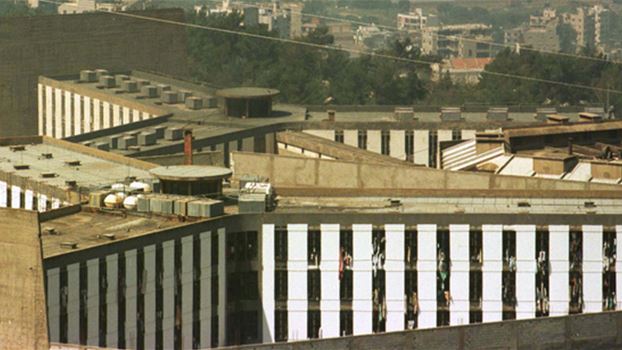 According to a communique issued by the Internal Security Forces: "A search operation is being carried out at the facility, including in block B."

"When guards began transferring a number of prisoners from block B to D, inmates started riots and burned mattresses to protest the security measures," the statement pointed out.

However, the ISF stressed that no injuries were recorded and the situation is under control.
Interior Minister Nouhad al-Mashnouq, who arrived at the facility to supervise the operation, said that the implementation of the security plan at Roumieh began after investigations showed that some inmates are linked to security acts in Lebanon.

"The operation began after intercepting phone calls between a group of inmates at Roumieh and members of the Islamic State of Iraq and the Levant concerning the attack on Jabal Mohsen."
Two suicide bombers who hail from Tripoli carried out Saturday's attack on a packed cafe in Jabal Mohsen.

Security forces began carrying out strict security measures near the prison as army helicopters hovered over the facility.
Flames and black smoke billowed from one of the facility's buildings, media reports said.

The operation was carried out by ISF special panthers unit.

There are around 190 Fatah al-Islam prisoners at the prison's block B.
The inmates were arrested in 2007 on charges of fighting or aiding the Fatah al-Islam fighters in the Palestinian Refugee camp of Nahr al-Bared that lies near the northern coastal city of Tripoli.

The policemen and soldiers were abducted by the gunmen in the wake of battles in Arsal in August.
A few of them have since been released, four were executed, while the rest are still being held.