Hizbullah Secretary General His Eminence Sayyed Hassan Nasrallah delivered on Friday a televised speech, in which he tackled a number of regional and internal issues.

During a ceremony held on the Holy Prophet's Birthday and al-Imdad Association Day, His Eminence saluted the officers and soldiers of the Lebanese Army and the Islamic Resistance who are deployed on the border and are protecting the country against "Israeli" and Takfiri terrorist attacks. 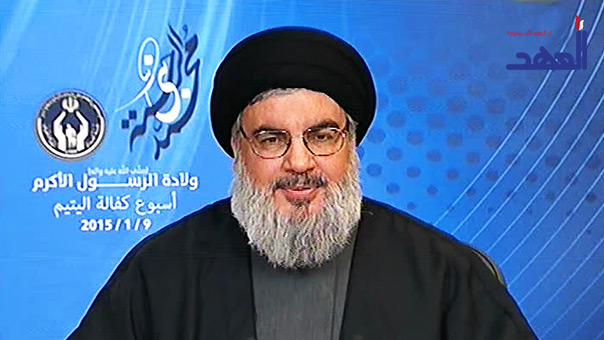 "They are defending their people in snow, cold and harsh conditions, but they are insisting on steadfastness and perseverance," he said.

In parallel, His Eminence hailed the "LA soldiers and Resistance men, who are shouldering this major national and religious responsibility because they are the true followers of the Prophet of God and the real defenders of the Lebanese people."
On the death of ex-PM Omar Karami, Sayyed Nasrallah said: "May God have mercy on late ex-PM Karami and aid his dear son in carrying on the same path."

Regarding the occasion of the Holy Prophet, he said: "Prophet Mohammad [PBUH] was one of the greatest manifestation of Divine Mercy in this universe and among all creatures. Thus, Prophet Mohammad called his companions to be characterized by the Divine morals."
According to His Eminence, "The terrorist groups have insulted the Prophet more than those who composed books or made insulting films. In this era, some terrorist groups are linking themselves to the banner of Islam and the Prophet of Islam through their obscene, appalling and inhumane practices."

"The terrorist groups have insulted the Prophet of God and the Islamic nation more than the enemies of the Prophet," Sayyed Nasrallah confirmed, and pointed that "the takfiri groups pose a threat to the region and it became clear that they pose a threat to what is above politics i.e. Islam itself."

On this level, Sayyed Nasrallah questioned: "Is it right to say that these people [terrorists] represent the messenger of God?"
"The insults were amplified by a host of factors, topped by the magnitude and type of the cruel and brutal practices and their geographic spread - in Iraq, Yemen and Afghanistan and now in the countries that exported these individuals to us, which has been expected from the very first day."

In response, Sayyed Nasrallah said: "There are missions that we must all assume, including the duty of introducing the Prophet and his morals and life to the world. "
"There is another aspect, which is the solidarity of the Islamic nation in the face of these takfiri groups and exerting efforts to isolate them and besiege them, and to say it openly, they must be eradicated."

On the response to these threats, "Nowadays, all Muslims are facing this challenge and the issue is not anymore limited to defending certain regions, minorities, governments or political maps. The issue has become the defense of Islam."
"These groups have always posed a threat to the region's countries and map. They pose a threat to our blood, future, present, honor and fate and they have started to pose a threat to Islam itself -- the Prophet and Quran. They represent the biggest threat to Islam as a religion and message and to the Prophet's stature."

Moving to the internal front, particularly the Hizbullah-Future dialogue, Sayyed Nasrallah reassured the Lebanese that it is moving forward with the required seriousness from the two parties.
"The dialogue greatly benefits the country and it is enough that the situation in the country has largely calmed down," he said, adding "some parties voiced doubts regarding the dialogue but it took place."

Moreover, Sayyed Nasrallah emphasized that "these parties questioned the outcome and I can tell you that, based on the two sessions and their atmosphere, we can speak of major positivity that can lead to tangible results."
"Some parties cannot tolerate that Muslims and Christians are sitting together because some parties in the region are seeking an Islamic-Christian war and they are being aided by the idiots of the terrorist and takfiri groups."

His Eminence also stated: "We as Lebanese people have an interest if all parties sit together and find solutions to their problems."
Hizbullah, according to Sayyed Nasrallah, "has been realistic from the very first day and we didn't announce high expectations."

However, he warned that "some parties do not want dialogue, but it leaves a positive impact on the general situations."

"We did not say that dialogue will resolve the dispute over the defense strategy, the arms of the resistance or the fighting in Syria. We clarified that we're living in a region that is witnessing a storm and we must seek a way to prevent the country's collapse."
Answering the doubts raised over reaching agreements on certain topics, Sayyed Nasrallah asserted: "Yes, it is possible and certain if the positivity continues."
"We're not saying that this dialogue is a replacement to the dialogue of the other forces," he clarified, announcing "Hizbullah's support and assist any dialogue between all parties and groups in Lebanon."

Commenting on the Free Patriotic Movement-Lebanese Forces dialogue, His Eminence said: "Hizbullah was not at all bothered by the FPM-Mustaqbal dialogue."
"Any dialogue between parties or between Muslims and Christians is a needed thing. These dialogues could pave the way for a comprehensive and inclusive national dialogue."
He also explained that " This dialogue is not on behalf of the rest of the political forces in Lebanon and it is not an alternative to national dialogue. It is rather the path towards national dialogue."

Sayyed Nasrallah reiterated "I have always called on everyone not to burn bridges because we have no choice but to sit together, engage in dialogue and continue our path together."
"As neighboring and regional states around us are preoccupied with their own concerns, there is a serious seek in the internal dialogue as well as the Christian-Christian dialogue to assist in the completion of presidential elections."

According to His Eminence, "The Lebanese themselves can handle their presidential election, not a regional or an international agreement. Only an internal agreement cam solve this issue."

On another level, Sayyed Nasrallah called on the Lebanese to cooperate in dealing with the consequences and repercussions of the snowstorm on the people, especially the areas that have been damaged

Moreover, Sayyed Nasrallah tackled the waste management crisis: "We hope the influential and sincere political leaders will play a role and that this file will not be neglected."
"The dispute has become well-known and we must not erect barricades. The harm will affect all the Lebanese and it is shameful for anyone to use the garbage file in a battle of any sort. The waste management crisis is a pressing issue and the government's work must not be paralyzed because some ministers have disagreements over the issue

Concerning the security issues, Sayyed Nasrallah highlighted: "There's no doubt that the security situation has been very good since several months due to the achievements of the army and security forces and I salute all the martyrs."
"The terrorist groups are waging a psychological warfare against the country, as is the case in the issue of the abductees. The media outlets are covering the issue but our real interest should be preserving the people's serenity and psychological stability."

On the recent developments in Qalamoun, Sayyed Nasrallah explained: "Lately, all the terrorist groups' efforts in Qalamoun was concentrated to control one region."
"The army, security forces and the extremist fighters of the resistance are defying the snow and enduring pain and exhaustion to protect us."

His Eminence also urged people to remain calm as the "takfiris are too weak to be able to launch broad assaults, contrary to what some media outlets are claiming."
"Reports of a broad military assault are baseless and the country is full of men and brave women. We remained resilient in the face of the world's strongest armies."

Moving to the Bahraini authorities' arrest of al-Wefaq leader Sheikh Ali Salman, he said: "The Bahraini people chose the peaceful movement since the start of their uprising."
"Bahraini people are demanding an elected Parliament, based on a rightful law. The people in Bahrain are under attack and their symbols and figured are in prisons. However, they didn't resort to violence."

The Resistance leader further clarified that "Bahraini authorities betted that the people got tired of their uprising, but this did not happen and people still protest peacefully."
Slamming the Bahraini regime's brutality, Sayyed Nasrallah warned that "In Bahrain, there exists a scheme similar to the Zionist project i.e. settlements, huge invasion and naturalization."
"The reason behind the peaceful approach is not the inability to send weapons or fighters to Bahrain, but rather the fact that the clerics, political leaders and people in Bahrain are preventing that and seeking a peaceful solution."

Moreover, Hizbullah Secretary General emphasized that "the opposition's religious and political leadership is insisting on peacefulness, and we know that peacefulness is a difficult thing."

"Sheikh Ali Salman has never called for toppling the regime and he did not incite to violence. The authorities in Bahrain will realize that they are acting in a foolish way. They can imprison most of the Bahraini people but that will only stop the protests on the streets and they will not be able to stop the protests in prisons."

Meanwhile, Sayyed Nasrallah stressed that "the people of Bahrain are demanding an elected parliament and a proper electoral law and they are protesting peacefully. They were shot at and they did not fire back and they were killed in the streets but they did not kill anyone. They did not even use a single knife and this is what embarrassed the regime."