Mourning ceremonies marking the martyrdom of Imam Hussein (AS) were held in the presence of Supreme Leader of the Islamic Revolution, His Eminence Sayyid Ali Khamenei in Iran's capital of Tehran, on Wednesday night. 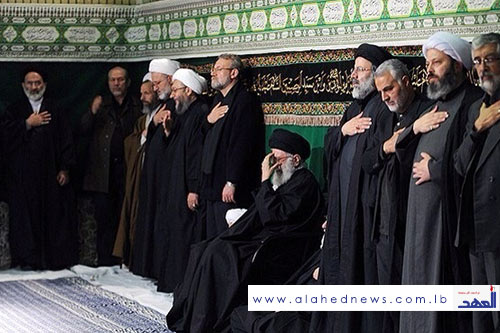 
The fifth night of mourning ceremonies for the martyrdom of Imam Hussein (AS) was held at the Imam Khomeini Husseiniya [religious center] in Iran's capital of Tehran.

Senior Iranian officials and thousands of people attended the ceremony. During the ceremony, the features and objectives of Ashoura were expressed and elegies were recited on this occasion.

The mourning services have been in place worldwide since the beginning of the Muslim month of Muharram.

The annual Muharram ceremonies symbolize the eternal and unwavering stance of truth against falsehood and humanity's struggle against injustice, tyranny and oppression, the cause for which Imam Hussein (AS) was martyred.

Imam Hussein (AS), along with members of his family and closest companions, were martyred on Ashoura in the battle of Karbala, Iraq, against the second Umayyad caliph, Yazid I, in 680 AD.