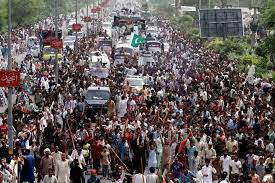 Transmissions of the main Pakistani Television [PTV] news channel were cut for around half an hour before security forces cleared demonstrators from the building in Islamabad's high-security "red zone".

The brief seizing of PTV by protesters armed with clubs came after fresh street clashes in which police were pelted with rocks and responded with teargas.
Late on Sunday the powerful army called for a peaceful settlement of the political crisis that has shaken Pakistan and weakened the government of Prime Minister Nawaz Sharif.

Opposition groups marched to the capital on August 15 to try to oust Sharif over alleged election fraud, triggering a crisis that has raised the specter of military intervention in a country ruled for half its history by the army.

The military urged the government and protesters to settle their differences peacefully, but warned it was "committed to playing its part in ensuring security of the state" after clashes left three dead and hundreds injured.

Fresh clashes erupted on Monday morning as heavy rain fell on the capital, when more than 3,000 demonstrators again tried to march on the building, an AFP journalist at the scene said.

Protesters pelted riot police with stones and some smashed up motorbikes with wooden clubs. Police tried to respond with tear gas but the heavy rain appeared to make it ineffective.

Some managed to breach the perimeter fences of some official buildings, but paramilitary security forces stopped them at the entrance to the PM's house.
Both Khan and Qadri appeared on the shipping containers they have used as stages to urge their supporters not to resort to violence.