UN Secretary General Ban Ki-moon said Sunday that the persecution of Iraqi Christians who have been driven from their homes in Mosul by the so-called "Islamic State" terrorists could constitute a crime against humanity. 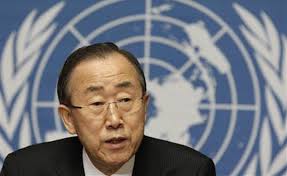 Hundreds of Christian families fled their homes in the northern city Saturday as an ultimatum threatening their community's centuries-old presence there expired.

Ban "condemns in the strongest terms the systematic persecution of minority populations in Iraq by "Islamic State" and associated armed groups," a UN statement said.

Mosul's new rulers said there would be "nothing for them but the sword" if Christians did not abide by those conditions by 0900 GMT Saturday.

While some families initially appeared prepared to pay the "jizya" Islamic tribute to stay in their homes, messages broadcast by mosques on Friday sparked an exodus.
Ban was "particularly disturbed by reports of threats against Christians in Mosul and other IS-controlled parts of Iraq," the UN statement said.

It added that he was also concerned by "reports that Turkoman, Yazidis and Shabaks are facing abductions, killings or the destruction of their property, and that the homes of Christian, Shia and Shabak residents in Mosul have been marked."