Twenty "Israeli" reservist commanders sent a letter to Prime Minister Benjamin Netanyahu Sunday, in which they stressed that over 100 soldiers under their command hadn't undergone any training exercises for three-and-a-half years. 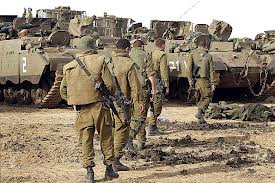 They further warned that "they were unprepared for any military conflict" the Zionist entity may face
"We've had three exercises [in the last three-and-a-half years] that were only for commanders," read the letter also addressed to War Minister Moshe Ya'alon and Finance Minister Yair Lapid.

The reserve troops stated that even these few exercises had taken place were short and limited, while one of them was held only for the officers.
First Sergeant Boaz Azoulay, a commander in the company cited in the letter, claims that the lack of readiness in his troops will no doubt lead to a disaster in an emergency situation.
"In the last three years, dozens of new reservists have joined [the company] and we have no idea who they are," said Azoulay. "We haven't practiced anything with them, and I don't want to know what will happen if tomorrow morning we have to go to war with them."

The combat soldiers also let the government officials know that they aren't impressed by reports of a budget crisis in the "Israeli" army, and said that the political debate on how to settle financial issues didn't interest them; they were just informing the government of the dire situation.
"Do whatever you want, we don't care who's right. As far as we're concerned, put aside part of the budget just for training reservists and keeping up preparedness. We aren't politicians, we just want to say what's happening in the field on the side of the combat reservists," said the letter.

The commanders further said that one of the platoons in the company has only been trained once on a vehicle specifically made for their unit. They noted that they don't lack equipment, but their vehicles aren't worth anything if the soldiers don't know how to use it.

First Sergeant Eli Amir stated that the soldiers were using advanced equipment that they had never trained with.
"There were engineering tools for breaking into buildings that were relatively new and that we had never practiced with," he said, adding that "We are expected to perform like soldiers in their active service, but we aren't in an active battalion.

"We spoke with the battalion commander and the brigade commander and we are always told, 'there's no money'. Everyone blames the career soldiers and that's not right because they work really hard in our battalion. I've been in the reserves for 20 years and I've never seen such a situation of unpreparedness... maybe before the Second Lebanon War," said Amir.