An international court set up to investigate the 2005 assassination of former Lebanese Prime Minsiter Rafik Hariri has summoned al-Akhbar's editor-in-chief and a journalist for al-Jadeed Television over two counts of Obstruction of Justice, the body announced Thursday. 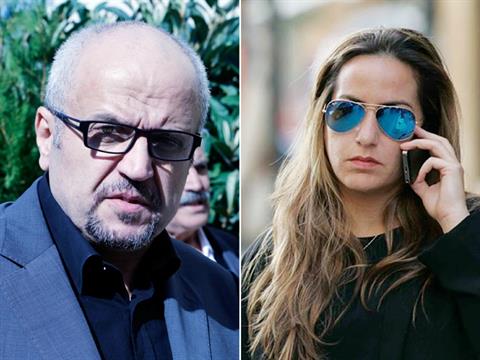 The Hague-based Special Tribunal for Lebanon [STL] said there are "sufficient grounds to proceed against" Ibrahim al-Amin of al-Akhbar and al-Jadeed's Karma al-Khayat "for the publication of names asserted to be those of alleged confidential witnesses in the Tribunal's proceedings," a statement said.

The charges against Amin relate to the decision of al-Akhbar in January 2013 to publish the names of 32 witnesses belonging to the STL's prosecution.
The summon against Khayat, Deputy Head of News and Political Programs, involves material broadcast on al-Jadeed in August 2012.

"There is prima facie evidence that the publication of information relating to the identity of alleged confidential witnesses entailed knowing and willful interference with the administration of justice" in breach of court rules, the statement, authored by contempt judge David Baragwanath, said.

The summons were issues on January 31, but only publicized Thursday.
The court set May 13, 2014 as the date for Amin and Khayat to appear before it, either in person of via video link.

If convicted, the two editors face a maximum of seven years in prison, a fine of 100,000 euros, or both.

The decision to summon the journalists is likely to expose the court to criticism due to its failure so far to publicly identify the sources of past leaks, or to prosecute Western news outlets that have published sensitive details about the Hariri investigation.
German magazine Der Spiegel first disclosed the alleged involvement of Hezbollah members in the Hariri assassination in 2009, relying on leaked documents. The Canadian Broadcasting Corporation published a report in 2010 that revealed sensitive details including the investigation's breakthroughs in tracking phones used by the suspects involved in the assassination.

The decision also exposes the court to charges of curtailing freedom of the press in Lebanon.
A briefcase was stolen from an STL investigator during a visit to Beirut's southern suburbs in October 2010, when a crowd swarmed him and his colleagues, but the precise contents remain unknown.

Judge David Baragwanath, in a decision made public Thursday on the court's website, said freedom of the press was essential, but that media outlets must obey the law.
"With respect to contempt of the Tribunal, this means that the freedom of the press must find its limits where it impinges upon the Tribunal's ability to function properly as a criminal court and to administer justice for the benefit of the people of Lebanon," he said.

While the court's rules prohibit any interference with its mandate, it recognizes "the ability of the press otherwise to comment on the Tribunal's work, including criticizing it."

In its first public reaction to the court's announcement, al-Jadeed's evening bulletin accused the tribunal of "slandering" journalists and scapegoating media outlets for its own failure to complete its mandate. It said the STL showed disdain toward journalists and sought to turn the country's media outlets into subservient agencies, criticizing it for failing to investigate alleged abuses by former investigators and witnesses who misled the court.