A young man from the Gaza Strip is producing handmade art using the remains of spent "Israeli" ordnance, in the process seeking to disprove popular misconceptions about Palestinians. 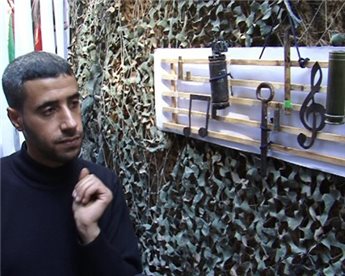 Mohammad al-Zumar searches the ruins of Gaza buildings that have been destroyed during "Israeli" military offensives, collecting the remains of missiles and other spent ammunition to use as raw material for handicrafts which he has assembled into an exhibition in his home.

He only started his project after the "Israeli" military assault on Gaza in 2008-9, when around 1,400 Palestinians were killed and thousands more injured over the course of a three-week-long bombardment.
"After the war I started to collect shrapnel from shells and bombs, writing phrases on them calling for peace and love," al-Zumar explained.

In order to ensure that the materials he collects do not pose any danger, al-Zumar has been regularly consulting munitions experts from the Gaza government, who have also helped provide him with more objects to use in his work.
Al-Zumar highlighted that he has so far produced 30 works of art using the remains of explosives.

Asked about costs of his work, he said all he needed was the remains of explosives, which he receives for free, in addition to paints, which he buys.
Like 40 percent of Gazans, al-Zumar is unemployed and as a result he often has difficulties buying the paints he needs for his art.

Despite this, al-Zumar perseveres in his work.

Al-Zumar hoped that his simple home exhibition will one day attract international solidarity activists who visit Gaza, helping them "see the human side of the Gaza population.