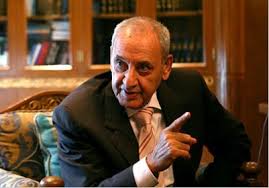 Based on the investigations with al-Qaeda terrorist Mahmoud Abou Aalfa, as-Safir and al-Akhbar dailies mentioned that Berri was the target of an assassination bid.

In this context, Aalfa confessed that the terrorist Leader Sirj Dein Zoriqat tasked him to set a plan for a suicide attack by one or more booby trapped cars against Berri's residency in Ain al-Tineh.

The Qaeda-linked Abdulllah Azzam Brigades affiliate further admitted that several people were tasked with monitoring the entrances of Ain al-Tineh castle and the places that Berri frequently visits.

He also unveiled that he had explored the area more than once. He inspected all the entrances to the palace, the durability of iron gates, and the extent of its resistance to explosions.

As Aafla found it very difficult to pass Ain al-Tineh security measures, the primary scheme was to implement the attack with several suicide bombers.

The newspapers also reported that another group, from Tariq Jddedeh, was also tasked with monitoring the residence of former Minister Wiam Wahad, who is head of the Arab Tawhid Party leader.

Sources stated that Information Branch Chief Brigadier General Imad Othman told one of Berri's aides of all the details of the operation and advised that Berri travel less frequently.


Media reports said on February 20 that the Internal Security Forces Information Bureau had arrested, ahead the Bir Hasan twin blasts, Aalfa confessed of being tasked with monitoring al-Manar TV and the Iranian Cultural Center.