Gunmen opened fire near several opposition protest sites in Bangkok Wednesday, stoking tensions in the capital as Thailand's embattled prime minister flew to her political stronghold in the north. 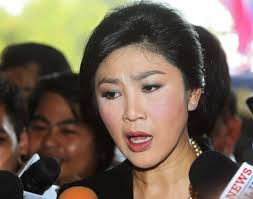 Street violence, often targeting protesters, has become a near-daily feature of the almost four-month-long crisis gripping Thailand, with the toll standing at 22 dead and hundreds wounded.

Police said unknown gunmen fired sporadically early Wednesday for around an hour in three areas of Bangkok where demonstrators are camped out alongside upscale shopping malls and luxury hotels. Nobody was wounded.

"We don't know which side fired the shots, but the aim of the gunmen is to intimidate," deputy national police spokesman Anucha Romyanan said.
Prime Minister Yingluck Shinawatra is under intense pressure to step down with the protesters calling for an unelected "people's council" to tackle corruption and a culture of money politics.

Her supporters say they will not accept the removal of an elected government by the protesters, military or the courts, raising fears of a protracted standoff.
Yingluck has been summoned by an anti-graft panel on Thursday to hear charges of neglect of duty in connection with a rice subsidy scheme that the opposition says is rife with corruption.

If found guilty she could be removed from office and face a five-year ban from politics.
Yingluck flew to the northern city of Chiang Rai on Wednesday to inspect government-backed projects, saying she might not attend the National Anti-Corruption Commission hearing.
"I have not yet made up my mind," Yingluck told reporters when asked if she would face the panel.
But a government official who did not want to be named said Yingluck was expected to stay in northern Thailand until Friday.

Officials denied the premier was on the run from protesters, who have vowed to pursue her wherever she goes and have besieged state buildings where she has held cabinet meetings since the occupation of her headquarters in December.
"She is not avoiding the political situation in Bangkok," said Transport Minister Chadchart Sittipunt.
More than 700 people have been wounded in street violence since demonstrators took to the streets in late October seeking to curb the political dominance of Yingluck's billionaire family.

The opposition blames Yingluck's followers for the violence, while government supporters accuse the demonstrators of trying to incite the military to step in.
Protesters have occupied several key intersections in the Thai capital with guards - many wearing body armor - searching cars and pedestrians at road blocks made from tires and sandbags.
Thailand has been scored by deep divisions since a bloodless coup by the military in 2006 ousted Yingluck's elder brother, Thaksin Shinawatra, as prime minister.
A general election held on February 2 failed to calm the crisis after protesters obstructed the vote in many opposition strongholds.

Election re-runs are due to be held on March 2 in five of the affected provinces but further disruption appears likely, particularly after a recent court decision restricted the use of force by the authorities to deal with the protests.