Hizbullah held a memorial ceremony for martyr commander Hassan Lakkis on Friday. Hizbullah Secretary General His Eminence Sayyed Hassan Nasrallah delivering a speech at the ceremony paid tribute to the soul of Martyr Hassan Lakkis, joining condolences and congratulations on the martyrdom of who he called ‘a dear and great leader". 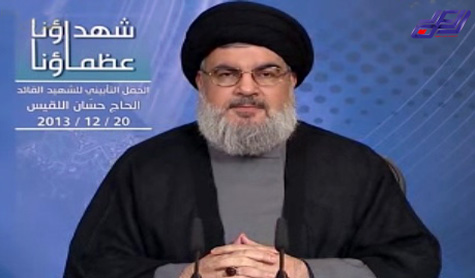 Commander Lakkis was martyred on December 3 when gunmen assassinated him in front of his home in St. Therese-Hadath while he was on his way back from his work.
Hussein Hassan Lakkis, the eldest son of the martyr, delivered a short speech before Sayyed Nasrallah addressed the crowds gathered in Sayyed al-Shuhada complex in Beirut's Dahiyeh (Southern Suburb).

Young Hussein iterated that his father martyr Hassan Lakkis is still alive in each and every one of the resistance fighters. Addressing Hizbullah Secretary General His Eminence Sayyed Hassan Nasrallah, Lakkis described him as the father of the martyrs and vowed to keep the pledge and follow the footsteps of his father, along with the fellow Mujahideen.

Paying honor to the martyr, Sayyed Nasrallah said that such great martyrs are away from the limelight while they are alive and even after martyrdom. He assured that these martyrs have a life that is interrelated and intertwined with the resistance movement, and keeping secrecy prevents the Resistance from revealing the great accomplishments of these honest and steadfast brave hearts.

"Even after their martyrdom, we are still unable to reveal the details of their duties and life because their actions are such an integral part of the resistance. These types of members and martyrs have no life outside of the resistance."

"These martyrs are unknown unless to the close surrounding... We cannot talk about their accomplishments because we are still in the middle of battle. Hiding the sublimity of these martyrs is part of the sacrifices of the martyrs' families."
He assured that we reach victory only through martyrdom, hoping that "one day would come when we can speak of their accomplishments, and even life."

Describing martyr Lakkis, Sayyed Nasrallah said "Martyr Hassan was a fighter who made many sacrifices, he was a hard worker and a loving person, an innovative and well-mannered man, he worked day and night for the Resistance. He was also one of the Resistance's brilliant minds. He was in the frontlines during war, and he was a good friend of mine when we were young men growing up in Baalbeck."

"Israel" behind the Assassination

Sayyed Nasrallah accentuated what Hizbullah declared since martyr Lakkis's assassination took place, stating that all evidence indicates and confirms that "Israel" stands behind the crime.
"The investigation will continue, yet we have the evidences that points to the "Israeli" enemy," he said.

""Israel's" media dealt with the news in a manner that shows they are adopting the assassination," he noted, stressing that the Resistance movement pays the price of victory over the "Israeli" enemy.

The assassination, according to the Hizbullah leader, is an "Israeli" attempt to strike the basics and pillars of the Resistance power and capabilities, and in this same very context came the martyrdom of Haj Imad Moghnieh, Ghaleb Awali, Ali Saleh, and Abou Hassan Deeb.

"Mistaken are those who think the martyrs were killed on the sideline of battle, they were killed in the heart of battle. This is a price the Resistance has to pay for its victories including the 2000 liberation."

Moreover, Sayyed Nasrallah concerning the "Israeli" crime said "the killers will be punished sooner or later. The blood of our martyrs will never be taken for granted and those who killed our brothers will not be safe anywhere, they will be punished."

The Hizbullah SG declared that Hizbullah's victories embarrass those who believe in weakness and defeat in our region.

Those who target the Resistance aim at tarnishing its image and weakening the will of the Resistance environment, according to Sayyed Nasrallah.
He added that the US spends tremendous sums of money to fund media outlets to frustrate the social environment.

But he assured that Hizbullah is only concerned about confronting "Israel".

Detailing on the internal arena, Sayyed Nasrallah stated the latest events in Tripoli are very dangerous. He noted that the March 14 mentioned a serious item in the Tripoli declaration, which implies declaring war.

Referring to the verbal escalation, Sayyed Nasrallah said "In the Tripoli Declaration, the March 14 mentioned that they reject Shiite extremism stemming from Iran, and this is refused sectarian language."

"The declaration accuses us of being murderers, takfiri and foreigners, and this is dangerous because it cancels the possibility of starting dialogue."
Yet, Sayyed Nasrallah assured that "We do not aim at war against you, we have always been convinced and were confident that we should sit together at the dialogue table, let us leave some space for reconciliation."

To Safeguard the Lebanese Army

"We must protect and support the army because it is the last remaining state institution that enjoys the consensus of the rival powers. All will be lost if the army is lost. We should not doubt the army."

Concerning Hizbullah's position on Syria, he accentuated that "Hizbullah will not change our position on Syria no matter how great the pressure because we are waginh a battle for survival for the whole region. 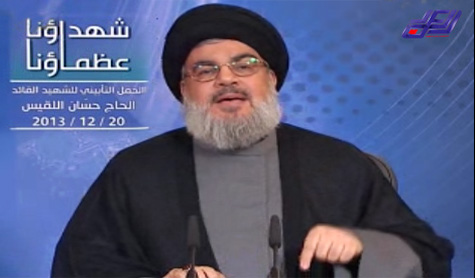 Criticizing how all problems in Lebanon are being linked to Hizbullah's involvement in Syria, Sayyed Nasrallah assured that these problems exist even before the Resistance became involved in it.

He pointed out that the battle in Syria is not sectarian, but rather linked to the takfiri threat, which is a threat to Syira, Lebanon, Palestine and all Shiites and Sunnis as well.
"The takfiri threat in Syria does not only target minorities, but it targets all who differ from it," he noted.

Sayyed Nasrallah reminded of the previous speech which dealt with the reason why Hizbullah is involved in Syria. In his earlier speech on the day of Ashura, Resistance leader touched on Syria saying "The presence of Hizbullah fighters on Syrian soil aims at defending Lebanon, the Palestinian cause, and Syria, which in its turn defends the resistance.
On another note, he highlighted that media outlets are spreading a large number of rumors against Hizbullah.

Some Lebanese and Arab media outlets lie constantly about the number of militants dying in Syria. They are intentionally spreading lies about Hezbollah. For example, they said that 500 Hezbollah fighters died in the battle in Al-Ghouta al-Sharquiyya and will soon become 1000. They want to lower the morale of Hezbollah and its fighters.

National Unity Gov't Should be Formed

He went on to say "Constitutional responsibility, courage, and manhood is accomplished through a national unity government. It is imperative that on May 25 we elect a new president. I do not think that any party in Lebanon wants presidential vacuum...We refuse vacuum and we will discuss this issue with our allies and we will definitely have a candidate for the presidency representing our political group."

Sayyed Nasrallah concluded "Real sovereignty is that we Lebanese elect a president without the aid or order from any other country. If we manage to do so on May 25, this day will become the real day of sovereignty and independence." 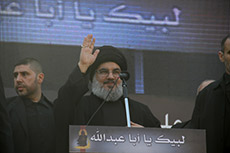 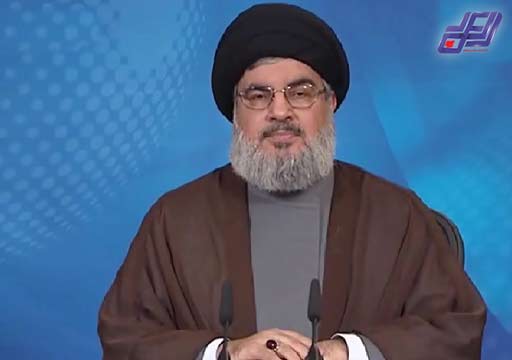