Head of the Yesh Atid [There Is Future] "Israeli" party, Yair Lapid, stated Tuesday that opposes the stance of Prime Minister, Benjamin Netanyahu, who insists that the Palestinians must recognize "Israel" as a Jewish State before any peace agreement can be reached.

Lapid told Bloomberg News that he does not believe "Israel" "needs a Palestinian recognition of it as a Jewish state", and added that he previously informed Netanyahu of his position. 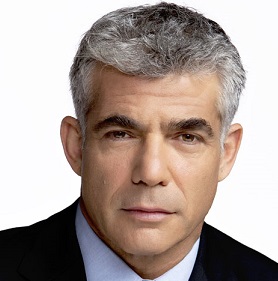 "My father did not travel all the way from the Ghetto in Budapest so that he can receive a recognition from the Palestinian President", he said, ""Israel" is a place for all Jews to define themselves, we spent 2000 years in exile, and now we are strong, independent and make our own decisions".

Lapid, who currently serves as the Finance Minister, said that he supports the two-state solution, but did not clarify his beliefs regarding how a final status peace agreement with the Palestinians will look like.
He only said that peace talks are taking place and that only the United States, the direct mediator, especially Secretary of State, John Kerry, can disclose details on the current "process".

He refused to answer a question regarding his position whether "Israel" should maintain presence in the Jordan Valley of the occupied West Bank, but said that he is against "dividing Jerusalem", and that he believes "the Palestinian will eventually drop their demand regarding East Jerusalem as the capital of their future state".

"Israel" refuses to recognize the internationally guaranteed Palestinian rights, such as the Right of Return of the refugees, a full withdrawal from the occupied territories, including occupied East Jerusalem, and refuses to hold talks on other main issues such as borders and natural resources.

Another major obstacle to peace is "Israel's" ongoing and escalating illegal settlement construction and expansion activities in the occupied territories, in addition to its ongoing invasions and violations, including arrests, demolition of Palestinian homes and property.