"Israeli" Settling Minister Uri Ariel viewed that "Israelis" "must be able to pray on the "Temple Mount" [AL-Quds Holy Mosque] whenever they want." 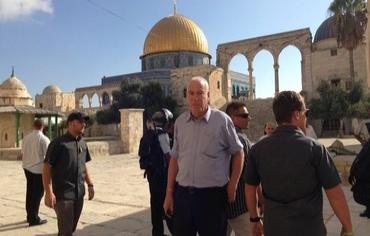 As he led the Wednesday's desecration to the Islamic Holy site, Ariel claimed that al-Aqsa "is the holiest place for the Jewish people, and must be open for prayer at every hour to every Jew."

Ariel invaded into al-Quds Holy Mosque Wednesday, and hoped that the "Israelis" would be able to do the same.

Five people were detained by "Israel".

The "Israeli" minister further revealed that he "plans to continue to go up and strengthen "Israel's" sovereignty in the site."
"The "Temple Mount" is ours, and it cannot be argued about or negotiated," Ariel emphasized.

Earlier this year, Ariel launched virtual, online tours to the Islamic site.
Al-Aqsa compound, containing the mosque and the Dome of the Rock, is the third holiest site in Islam and "Israelis" claim that is the place of the ancient Second Temple stood.