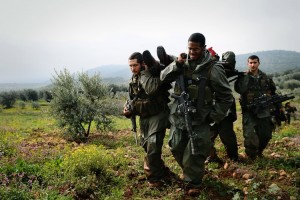 According to the "Israeli" dailies, the part of the new "Israeli" army's budget cut plan, the main points of which were released on Wednesday, between 3,000 and 5,000 officers and non-commissioned officers will be dismissed from duty.

At the same time 1,000 new career soldiers will be integrated to arrays which the "Israeli" army is interested in boosting, including Military Intelligence and the Teleprocessing Corps.

In an attempt to relieve the "Israeli" community, the "Israeli" army claimed that the purpose of the new plan is "to make the army leaner and more muscular, while matching the threats evolving in the Middle East."
The plan is set to save the army's budget $1.92 billion in five years. It includes, among others, shutting down several Air Force squadrons, armored units, warships, reserve units and more.

At the same time, many combat units have received notices of cutting down dozens of percent in their drills as a result of the coming year's budget cuts. One of them is an artillery battalion in the Occupied Golan heights.
In this context, the "Israeli" Army Northern Front cut its annual military drills by three weeks, which prevented its soldiers to perform the final comprehensive drill.

The rest of the artillery battalions in the division - the largest in the "Israeli" army - will suffer cuts in an average range of seven weeks a year. The move will extend their operational deployment to ten months a year, almost the same as between the years 2000 and 2006.

The Kfir Brigade and the Egoz Unit have experienced similar cuts already. An elite armored unit drill in Zeelim, meant to include a joint action with an aircraft, was cancelled after the squadron received a notice it is being permanently dismantled.

"I look with concern at the plan and I fear our readiness will be damaged," a high-ranked officer told Ynet. "What's left in the army must stay high-quality. We can't return to the same situation we were in on the eve of the Second Lebanon War. We mustn't lose the faith of our reserves which we've rebuilt over the last seven years."