Visitors of Syrian President Bashar al-Assad quoted him as saying that he is both relieved and worried at the same time. 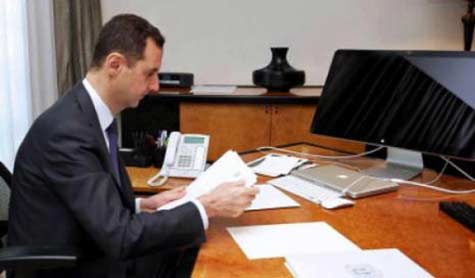 According to al-Akhbar Lebanese daily, al-Assad expressed his relief that "Syria has not only overcome the stage of strategic threat, but also triumphed throughout this period by its steadfastness."

He further hailed "Syria's victory and resistance against the fiercest campaign of international, media, security and political hypocrisy."

"I am relieved that the spine of the Syrian state is still strong, especially that three million Syrian students have taken final exams amid the war," he added.
However, he expressed his concerns that "the war left a lot of destruction in the infrastructure, the economy and the Syrian society's collective memory. Thus, the reconstruction of infrastructure as well as people requires huge effort."

However, he said he was worried about the structure of the Syrian society.
"The psychological effects that targeted the citizens through the displacement and the destruction of people's homes as well as the loss of beloved ones, memories, and homes, are a difficult and complex issue that won't be resolved by a psychiatrist," Al-Assad viewed.

On the resistance level, al-Assad affirmed that the "Syrian society's engagement in resisting the "Israeli" enemy contributes to fortify the internal front."
"We have a long-term plan to form a popular resistance, similar to that of the Lebanese resistance in South Lebanon, to fight "Israel" in the Golan," he added.
The Syrian President also urged "all nationalistic parties and powers, including the Palestinian powers to rejoin the resistance."
"Syria is the gate for the liberation of the human beings in the Middle East and in the world, though the project of resistance," he added.
Al-Assad also commented on the oil threats.

In this context, al-Assad urged the Lebanese and Syrian people to protect their oil wealth."
"The coming great battle will be about oil, we have to protect our oil in Lebanon and in Syria, in the land and in the sea," he said, and asserted that "the oil in the Gulf is being used by the Americans to destroy our countries."
"We have to use our oil for the development of our countries and to confront the "Israeli" enemy's greed," al-Assad said.