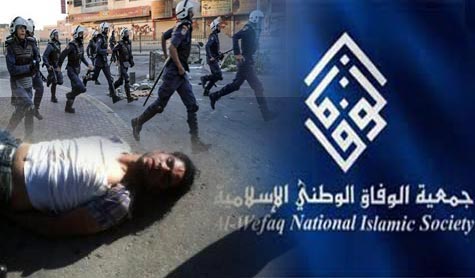 Al-Wefaq's Human Rights facility clarified that al-Ghasra was arrested in an alarming manner; In Bani Jamra, he was surprised by civilian and security cars surrounding him, and al-Ghasra was witnessed on the ground surrounded by security forces.
Witnesses further reported that he had been beaten brutally and moved to an unknown place. For its part, Islamic al-Wafaa Movement warned that the young man's life is in danger.
"The regime had kidnapped al-Ghasra in an intelligence ambush," the Movement stated, stressing that al-Ghasra was tortured because he backed his people's cause.
The Movement further called for saving al-Ghasra from brutal distress.
Al-Ghasra's family, however, called on all local and international legal figures and organizations to quickly intervene to save Rida, fearing that the regime forces would kill him.