Russian Foreign Minister Sergei Lavrov stressed Friday that he does not understand why the world media have turned deliveries of Russian defensive weapons to Syria into a sensation. 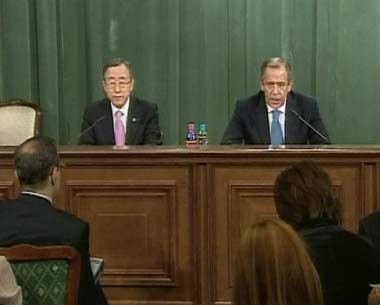 "I do not understand why the media are trying to turn it into a sensation," he said.

At a press conference after talks with UN Secretary General Ban Ki-moon in Sochi, Lavrov stated: "It is not a secret that we are delivering weapons to Syria under previously signed contracts, without violating any international treaties and our laws, which are some of the strictest in the world in terms of export control."

For his part, Ban Ki-moon said that the proposed international conference on Syria should be held as soon as possible, but that no date had yet been agreed.
"We should not lose the momentum," Ban said of a US-Russian proposal to bring the Syrian government and opposition representatives to a peace conference.

"There is a high expectation that this meeting should be held as soon as possible," he added.
Lavrov agreed. "The sooner the better," Lavrov told the joint news conference with Ban, who was due to meet President Vladimir Putin later on Friday.

Lavrov reiterated Russia's view that Iran should be invited to the conference, which could complicate its organization because of potential opposition from the West.