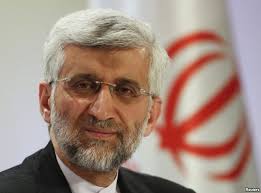 Jalili made the remarks at a press conference in Istanbul on Thursday.
"I had fruitful talks with Mrs. Ashton and we agreed to meet in the near future," he said.

Jalili noted that Iran and the International Atomic Energy Agency have also had constructive talks in Vienna in their meeting.

Jalili and Ashton met in Istanbul Wednesday to follow up on the last round of talks between Iran and the Group 5+1 held in Almaty, Kazakhstan, on April 5-6.
"Last night, as Lady Ashton said, we had long, useful talks," he added, and noted:. "We had the chance to go into details. We decided to continue working and keep on our talks."

Jalili further stated that Iran was "ready to continue the talks any time" but said Tehran's right to peaceful uranium enrichment "should be recognized".
For her part, Ashton called the talks "useful" in a statement on Wednesday and said it was time to "reflect on how to go to the next stage of the process".