12th Cairo OIC Summit Meeting was held in presence of Iranian President Mahmoud Ahmadinejad, who met with high ranking Egyptian officials, overshadowing the summit meeting with his historic presence in Egypt.
The Iranian President's visit to Egypt would be the first visit of an Iranian president after the victory of Iran and Egypt's Revolutions. 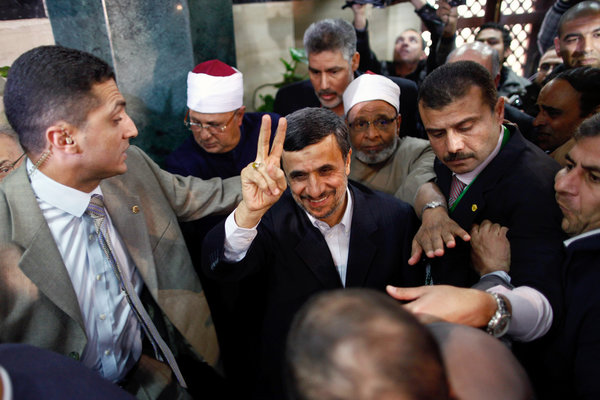 Shortly after President Ahmadinejad's arrival, both presidents held their first round of talks at the airport. Talks included the latest regional developments and ways for solving the ongoing Syrian crisis.
On the first day of the visit, Ahmadinejad held a meeting with the Sheikh of Al-Az'har University, Ahmad Tayyib.

Ahmadinejad stated after the meeting, "The Islamic world sources of jurisprudence and prominent clerics in Qum, Holy Najaf, and the Blessed Al-Az'har must be the standard bearers of saving mankind."
In a meeting with Egyptian journalists and media representatives, Ahmadinejad noted that Iran and Egypt resemble two brothers separated from each other for a long period, reiterating, "If today these brothers would unite hand in hand and boost each other's political, economic and cultural capabilities, there would leave no way for enemies to bully in Islamic countries, and conditions would rapidly change in favor of justice and demands of nations."

Moreover, Ahmadinejad met with a number of Islamic world heads of states, including the presidents of Turkey, Egypt, Senegal, Somalia, Sudan, Bosnia Herzegovina, Comoro, and the Head of the Palestinian Authority Mahmoud Abbas.
On the sidelines of the Cairo OIC Summit Meeting, a trilateral meeting between the presidents of Iran, Egypt and Turkey was held, focusing on a solution for the Syrian crisis.

Ahmadinejad evaluated the trilateral meeting as "positive and constructive."
Furthermore, Ahmadinejad attended the Special Palestine Panel Discussion of the OIC Summit, where he condemned occupation and asked world Muslims to take advantage of the entire material and human resource to end the atrocities observed against Palestinians.

The closing communiqué of the OIC Summit included 170 articles, in which chief articles stipulated the condemnation of "Israel's" raid on a research center in Syria, the need for nuclear-Non Proliferation Treaty member countries' to receive access to peaceful nuclear technology, the need for putting an end to the miseries of the Muslims in Myanmar, and condemnation of Zionist acts in occupied al-Quds (Jerusalem).

On the OIC Summit Meeting in Cairo, Ahmadinejad noted that challenges ahead can be great opportunities, provided that they are well managed.